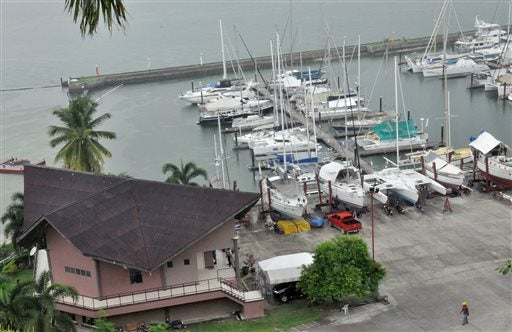 Photo of Holiday Ocean View Samal Resort on Samal Island taken on Tuesday, Sept. 22, 2015, a day after unidentified gunmen abducted a Norwegian resort manager, two Canadians and a Filipino woman from this southern Philippine island. The military is looking into reports that the gunmen are from Sulu province, a senior military officer said on Thursday, Sept. 24. AP PHOTO/MANUEL CAYON

Norwegian Kjartan Sekkingstad, who manages the marina, boasted of how low the crime rate was for both Igacos and nearby Davao City.

He would warn prospective visitors against lumping Igacos and Davao City with the rest of Mindanao, ravaged by four decades of Moro and communist insurgency and notorious for bandits who seize people, especially foreigners, for ransom.

“Don’t be misled by the problems reported in the media about Mindanao’s insecurity,” Oceanview says in a welcome message on its website.

“Samal Island and Davao City have a longstanding reputation as a safe area to live in. People are very friendly and any foreigner feels very safe anywhere in the area,” the message says.

The marina, which opened in 2010, features two docks with 56 berths, a boatyard and dry docking space for more than 20 boats, a clubhouse, and other facilities.

Located on the northwestern tip of the resort-lined Samal Island, the marina can easily be mistaken for a resort. Aside from docking space, it also offers repairs and maintenance services.

On Sept. 19, Sekkingstad, 56, showed off his new catamaran, which he built during his spare time.

Sekkingstad said it took him three years to build the boat but he could have finished it in one year and seven months, if he had just devoted his entire time to it.

Sekkingstad, who married the late Ellen Bangayan, whose family owns the Holiday Business Group (HBG), which operates the marina, was abducted together with two Canadians and a Filipino woman by unidentified gunmen on Monday night at the resort.

Holiday Oceanview boasts of an English-speaking staff, which makes it attractive to foreigners. “Unlike other Southeast Asian countries, English is widely spoken in the Philippines,” Oceanview says on its website.

“Since the marina opened in 2010, we have constantly attracted more and more international yachts,” it says. “In fact some boat owners have found it hard to leave.”

The website is peppered with comments from guests who enjoyed their stay on Samal Island.

“Our premises are guarded 24/7 by licensed armed guards as well as CCTV so we don’t have to watch out for petty theft and vandalism,” Oceanview says.

The security camera worked well on Monday night, even showing Sekkingstad shoving one of his abductors as he and the other victims were being taken out of the resort by the kidnappers.

Aquino: Suspects in Samal kidnapping may be a ‘new group’