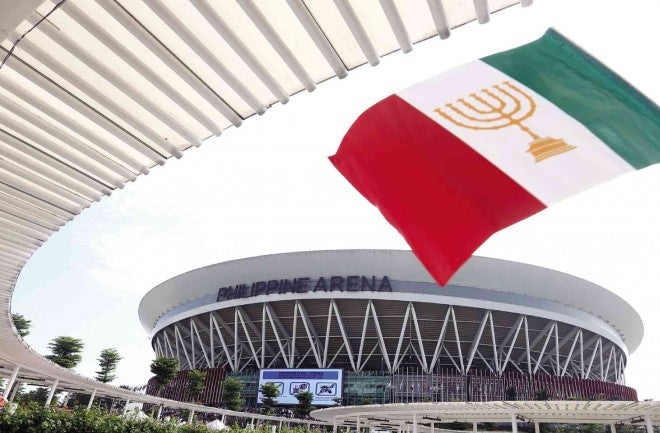 Instead of half a million people as earlier projected, only around 80,000 members and guests of Iglesia Ni Cristo (INC) are expected to flock to the Philippine Arena in Bocaue, Bulacan province, for their annual grand evangelical mission on Sept. 26, according to the police.

This has prompted traffic management officials to scale down their planned deployment and set aside worst-case scenarios for the weekend congestion on the North Luzon Expressway (NLEx), the main thoroughfare leading to the INC venue.

For its evangelical mission, the INC also invites nonmembers to the gathering that seeks to introduce them to the church’s goals and values. Saturday’s event, however, would not be concentrated in the Arena as members  in various parts of the country will be staging their own assemblies.

Senior Supt. Ferdinand Divina, Bulacan police director, said he would be deploying 500 policemen to augment the 180 traffic marshals from the Metropolitan Manila Development Authority and 20 officers from the Highway Patrol Group of the Philippine National Police.

Divina said the local police had received an assurance that there would be no repeat of the traffic mess on NLEx during the INC anniversary celebration in July at the Philippine Sports Stadium, another venue beside the Arena. The event created a three-hour gridlock as participants parked their vehicles on three of the four lanes of NLEx.

Along with the police, the Manila North Tollways Corp., which operates the NLEx, would strictly enforce a no-parking rule along the expressway, Divina said.

Vehicles that could not be accommodated at the Arena grounds could park along the shoulder lanes of the Plaridel bypass road in Balagtas town, he said.–Carmela Reyes-Estrope, Inquirer Central Luzon