At the hajj, biscuits for some, buffets for others 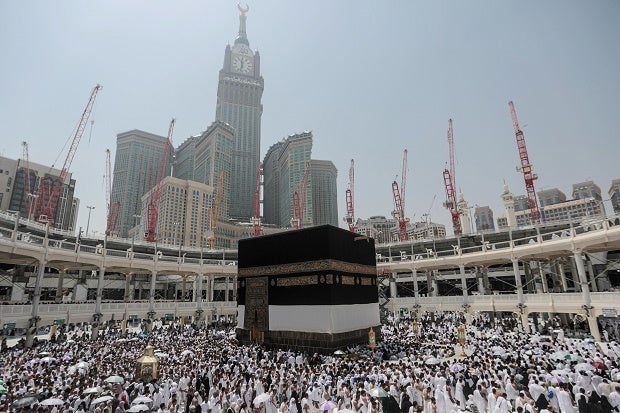 Muslim pilgrims circle the Kaaba, the cubic building at the Grand Mosque in the Muslim holy city of Mecca, Saudi Arabia, on Sept. 22, 2015. In the background rise the luxurious hotels where rich pilgrims stay. Out of sight is the district where the poor sweat it out. AP

MECCA, Saudi Arabia — They may be equal before God inside Mecca’s Grand Mosque, but the rich and poor pilgrims at the annual hajj clearly reveal their differences just beyond the gates.

Outside the southern end of the sprawling compound lies a temple to consumerism.

Several high-end hotels, malls and restaurants are found inside the six towers of the gargantuan Abraj al-Bait complex. It includes the Mecca Royal Clock Tower, the world’s third-highest building which rises behind the mosque.

In contrast, beyond the eastern entrance of Islam’s holiest site, water drips from air conditioners, garbage is piled beside the roads, and a stench fills the air.

Elderly vendors in tiny shops shout the prices of their simple goods — from traditional miswak (a teeth-cleaning twig) to prayer rugs, wooden rosaries and plastic slippers.

“The poorer people come to buy from here because in the other district the shops are more sophisticated and for people who have more money,” he tells AFP.

“The government pays everything, including the rent of the shop and the electricity. I only buy the goods,” says Hasan, a 74-year-old vendor.

Across from them, African women sit selling seeds to pilgrims willing to feed flocks of pigeons, a common sight around the massive mosque’s courtyards.

Volunteers outside the eastern gates hand out boxes of food to pilgrims who sit on the roads eating despite the heat of around 40 C (104 F).

“Our guests are generally the high-class and well-to-do pilgrims who are willing to pay more in return for comfort,” says an employee at one of the hotels, requesting anonymity.

The hotel charges an average of about $1,000 a night during hajj season, with a seven-night minimum, according to another employee.

Many of the rooms overlook the Grand Mosque’s holy Kaaba, a cube-shaped structure towards which Muslims around the world pray.

Yasser Riad, a guest at one of the hotels who came with his wife from Egypt, says they paid around $5,000 each for the whole trip.

“We try to be close to the Grand Mosque so we can save time for prayer,” says the 45-year-old lawyer. The couple shop at the mall connected to their hotel “because it’s usually too hot outside”.

For Um Hani, a 55-year-old pilgrim dragging her feet as she sweats under the heat of the eastern district, this is unimaginable luxury.

“The shops there are expensive. These open-air markets here are cheaper,” she says.

Um Hani could not have even made it to the hajj had her name not been randomly selected in the Egyptian government’s annual electronic lottery to perform the pilgrimage.

She is satisfied with the free “biscuits, tuna, beans, and juice” the pilgrims are offered at her shabby high-rise hostel, typical of the accommodation for poorer hajjis.

But rich and poor all wear the same ihram clothes for hajj — a seamless white two-piece garment for men and any loose dress, typically white, for women.

No matter which gate they enter from, the pilgrims gather side-by-side for prayer at the crowded mosque and leave together for the nearby tent-city of Mina to begin the hajj which peaks on Wednesday.