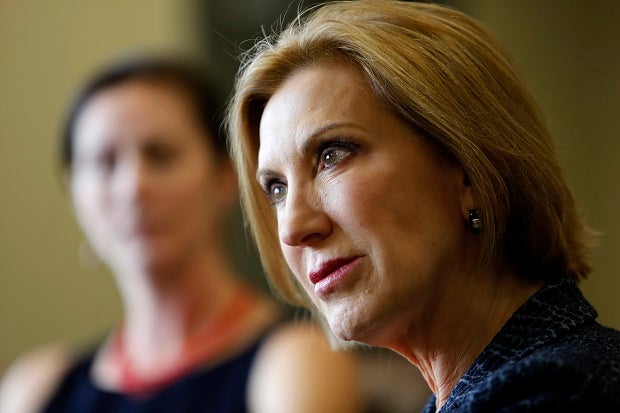 Republican presidential candidate, businesswoman Carly Fiorina, speaks during a private meet and greet, Tuesday, Sept. 22, 2015, at Johnson Hagood Stadium on the campus of The Citadel before her town hall meeting in Charleston, S.C. AP

CHARLESTON, South Carolina — Presidential hopeful Carly Fiorina joined her Republican rivals Tuesday in saying Chinese President Xi Jinping should not be honored with a state dinner at the White House.

The former Hewlett-Packard CEO said during a national security forum in South Carolina that she still would meet privately with Xi. But she said she would cancel the dinner as just one step in a new hard line against Beijing, which she criticized for cybersecurity threats, Xi’s military buildup in the South China Sea and human rights abuses.

After strong debate performances, Fiorina has climbed into the top tier of Republican candidates according to poll results.

Fiorina identified China, together with Russia and Iran, as aggressors that she would curtail if elected. Obama has dealt meekly with the three nations, Fiorina argued, comparing the trio to misbehaving children.

“What happens If you let your teenager do bad stuff over and over again, what do they do? Bad stuff,” she said, drawing a mix of laughter and applause at The Citadel military college in Charleston. “Well, it’s true of China and (others).”

Fiorina did not explicitly promise military action against China, suggesting she would use “economic leverage” instead.

In the midst of a campaign that has rewarded candidates who don’t hold elected office, Fiorina is looking to bolster her standing by emphasizing her foreign policy knowledge and experience gleaned over her years as a technology executive and a civilian adviser to the Central Intelligence Agency and other foreign affairs officials.

As president, Fiorina said she “would not tolerate” Xi building military outposts in the South China Sea. “Five trillion dollars of trade goes through the South China Sea every year, and China wants to be the choke point,” she said.

Fiorina did not say whether she might use US military force in the matter, instead saying the US should help other Asia-Pacific nations quash “China’s control of that strait.”

She also said the US would seek “retribution and consequences” for China’s intellectual property theft from US firms. And she blamed the Chinese government for the theft of personal data of millions of current and former US government employees. China has insisted it was not responsible for the hack. The US has publicly provided no direct evidence proving China was responsible.

At a later campaign stop in Myrtle Beach, Fiorina mocked the 2014 joint announcement in which Xi and Obama made a commitment for the two nations to curb carbon emissions as a way to combat climate change.

Fiorina said the deal is insufficient, adding that any action by the US alone is pointless. She did not, however, dispute the scientific conclusion that human activity is contributing to climate change.

Asked whether she would make combating emissions a priority in her dealings with China, she said, “No. … The answer is innovation” by the private sector energy firms, “not more regulation” by government.

In Charleston, Fiorina argued that the US can use economic leverage to alter China’s economic and military strategies, because China’s economic growth depends upon Americans to buy the goods they produce. Also, Beijing holds considerable amounts of US debt, in part to keep its currency pegged to the dollar and facilitate the trade imbalance that benefits Chinese producers.

“They are dependent on this market continuing to be open to them,” she said.

China rights record slammed in US ahead of Xi trip