US officials expect robust talks with China on cyber, trade 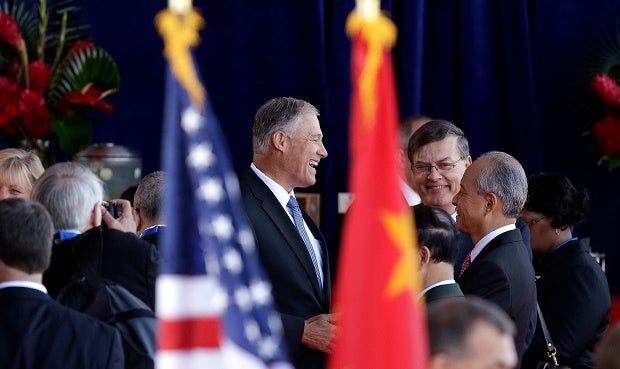 Gov. Jay Inslee, center, smiles as he talks with other officials as they await the arrival of Chinese President Xi Jinping Tuesday, Sept. 22, 2015, at Boeing Field in Everett, Wash. Xi is spending three days in Seattle before traveling to Washington, D.C., for a White House state dinner on Friday. AP

WASHINGTON — White House officials will seek to demonstrate during Chinese President Xi Jinping’s visit that cracking down on theft of commercial secrets and promoting fair trade is in China’s best interests in helping to sustain and grow the world’s second-largest economy.

White House officials previewing Xi’s visit Thursday and Friday say that engagement with China is critical. The officials said they expect robust discussions on cyber, trade and human rights, and they will also look for more ways to improve cooperation to stem global warming and improve global health. The two countries worked together to tackle the Ebola outbreak in West Africa.

Ben Rhodes, a deputy national security adviser, said that cracking down on the theft of intellectual property will be a centerpiece of discussions. He said US businesses are key stakeholders in promoting a strong US-China relationship, and China shouldn’t want to risk that support.

“We are increasingly hearing concerns about activities that the Chinese have been engaged in, so we want to make very clear this puts at risk China’s ability to continue on its growth if businesses don’t have confidence they won’t be subjected to cyber theft,” Rhodes said.

Xi is scheduled to arrive Thursday afternoon and the two presidents plan a private dinner that night. Officials said they expect the two leaders to use the dinner to have informal discussions about their respective priorities. On Friday, there will be an arrival ceremony at the White House followed by meetings and a joint news conference. A state dinner honoring the Chinese president will be held at the White House on Friday night.

Officials said the relationship between the US and China is complicated but that it could be argued they are working together on a broader array of issues than ever before. At the same time, they say the two countries face exceptional challenges “and we intend to tackle those issues head on and deal with them in a forthright manner,” said Dan Kritenbrink, senior director for Asian affairs with the White House’s National Security Council.