Pope Francis arrives in US for historic visit | Inquirer News

Pope Francis arrives in US for historic visit 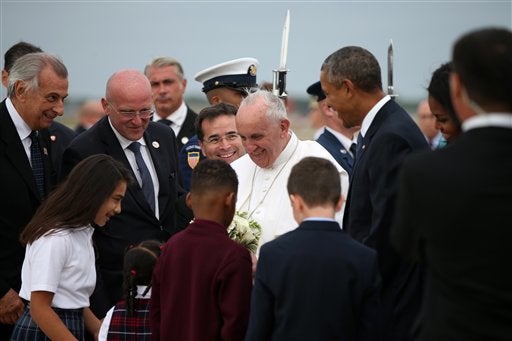 Pope Francis, accompanied by President Barack Obama and others, is greeted upon his arrival at Andrews Air Force Base, Maryland, Tuesday, Sept. 22, 2015. AP PHOTO/ANDREW HARNIK

ANDREWS AIR FORCE BASE—Pope Francis arrived in the United States on Tuesday for his first visit, a six-day trip that will include a meeting at the White House with President Barack Obama and a speech to Congress.

Obama and his family, along with Vice President Joe Biden, were on hand to greet the 78-year-old Argentine pontiff at Andrews Air Force Base outside Washington, along with US Catholic leaders.

A crowd of well-wishers erupted in cheers and chanted as Francis emerged from his plane in his traditional papal whites.

Obama, his wife and their daughters Malia and Sasha shook hands with Francis on the red carpet rolled out on the tarmac. The pope then made his way down the reception line of dignitaries and senior church figures.