Carpio’s ties to Roxas through The Firm hit 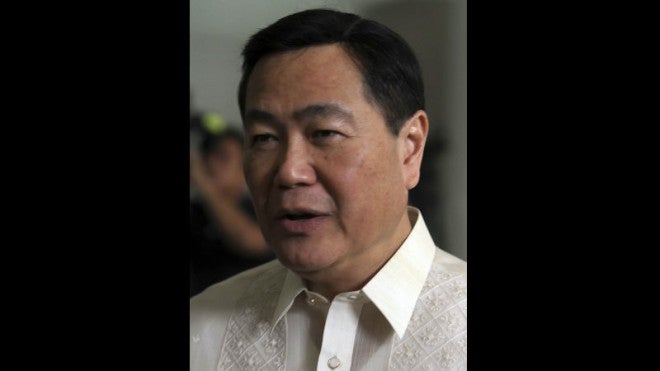 Supreme Court Senior Associate Justice Antonio Carpio should inhibit himself from Sen. Grace Poe’s citizenship case due to his association with a lawyer of Mar Roxas, a party-list lawmaker said on Tuesday.

At a forum, 1BAP Rep. Silvestre Bello III, a former justice secretary, noted that the senior magistrate shared an “umbilical cord” with Avelino Cruz Jr., a legal counsel of Roxas, at the Firm, now known as the CVCLAW Villaraza Cruz Marcelo & Angangco.

“Out of decency, he should inhibit himself. Whatever his decision, deliberately or not, it will be suspect because of his ties with the so-called Firm in the past,” Bello said of Carpio.

The lawmaker said he disagreed with Carpio on the point that Poe was a “naturalized” citizen instead of a natural-born citizen, suggesting that the freshman senator would need to prove her natural-born citizenship to be qualified to seek the presidency.

“Senator Poe never went through these processes,” he said.

“She was found in Iloilo at the doorstep of a house. They don’t know the parents. As a foundling, she is a natural-born citizen of the place she was found,” Bello said.

“She was found in the Philippines. The assumption is she is Filipino,” he said.

Bello said it did not matter if Carpio was above reproach and would rule impartially in Poe’s case.

Bello acknowledged that Carpio needed to detach his connection to the powerful law firm when he joined the Supreme Court.

“When you’re appointed to the Supreme Court, you have to divest yourself of that partnership. But it doesn’t mean the umbilical cord has been cut,” he said.

But House Deputy Speaker Giorgidi Aggabao, president of the Nationalist People’s Coalition and a vocal Poe supporter, said he thought Carpio should stay on.

“Justice Carpio is a very respected jurist. In fact, if I were to count with my fingers our top jurists, I would count Carpio as one of them. I think he should stay on the case,” he told another forum.

But Aggabao did not share Carpio’s view on Poe’s citizenship.

“Of course the opinion of Justice Carpio is his. The Senate Electoral Tribunal is a collective body and as a collegial body, the decision of the majority will carry the day,” he said.

“We respect the opinion of Carpio but our reservation is that the burden of proof has shifted from the complainant to Senator Poe,” he said. “It behooves [the complainant Rizalito David] to prove that Grace is not natural-born.”

Caloocan Rep. Edgar Erice of the ruling Liberal Party (LP) said the party had no problem with Poe’s citizenship.

“As far as the LP is concerned, we believe Senator Poe is a Filipino,” he said.

“Which is why in 2013, we helped her and recruited her for Team P-Noy. Her citizenship is not our problem,” said Erice, chair of the LP’s political affairs committee.

“This implies that someone who does not know [his or her] parents cannot be a congressman, senator, president or Supreme Court justice,” he said.

He cited Article IV, Section 2, of the Constitution, which states that a natural-born citizen “is a citizen of the Philippines from birth without having to perform any act to acquire or perfect [his or her] Philippine citizenship.”

“Since Senator Grace was presumed a citizen when she was born, she did not perform any act to be a Filipino and, therefore, is a natural-born citizen,” said Colmenares, who is seeking a Senate seat.