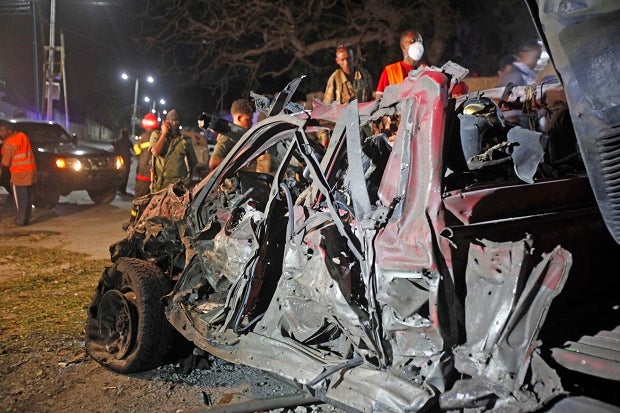 NAIROBI, Kenya — An Islamic extremist suicide bomber detonated an explosives-laden vehicle at the gate of the Somalia’s presidential palace in the capital on Monday, killing at least four people, a police official said.

The bomber rammed his vehicle near soldiers guarding the Mogadishu compound that is the official residence of the president, prime minister and the speaker of Parliament, Capt. Mohamed Hussein told The Associated Press by phone.

The bomber appeared to target foreign officials who were leaving the presidential palace, killing two of them, he said. He did not identify the nationality of the officials. At least two soldiers also died in the blast, he added.

Huge smoke could be seen billowing over the scene of the blast and soldiers fired into the air to disperse the crowd who gathered around, according to witness Abdirahman Mohamed, who lives near the presidential palace. Ambulances rushed to the scene to transport the blast victims to hospitals.

The Somali Islamic extremist group al-Shabab, which has ties with al-Qaida, claimed responsibility for the attack in a message broadcast over its online radio Andalus.

Despite being forced out of many of their strongholds, al-Shabab fighters are still able to launch lethal attacks in Mogadishu and elsewhere in Somalia, often targeting African Union troops and government officials.

The attack comes as Somalia’s regional and national leaders are holding consultative meetings focusing on presidential elections scheduled for next year.

Read Next
Nigerian official: 54 die in blasts in Borno state capital
EDITORS' PICK
Pagasa: Warm, sunny Sunday in most parts of PH
Is it safe to talk politics again at family gatherings? ‘The Reconciliation Dinner’ shows us what that’s like
House energy committee chair Arroyo bats for cheap electricity
EDITORIAL: To a bike-friendly future
The Best Tech Gifts For The 2022 Holidays
vivo’s coming to town to grant wishes with more holiday promos
MOST READ
LOOK: Vhong Navarro transferred to BJMP detention facility in Taguig
The Elephant Man in the Senate
Posh village as ‘shabu’ haven
LOOK: Zanjoe Marudo bonds with Ria Atayde, her family
Don't miss out on the latest news and information.