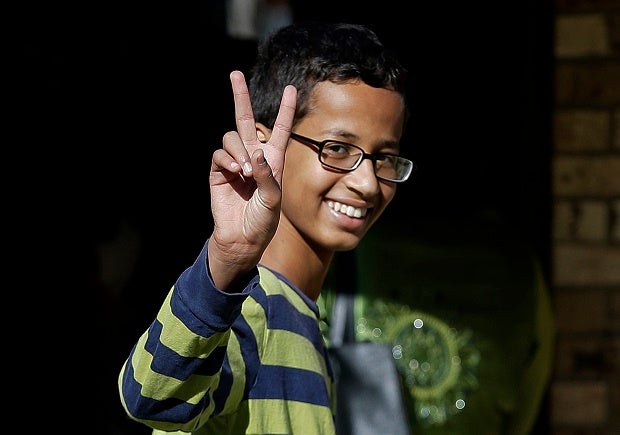 Ahmed Mohamed, 14, gestures as he arrives to his family’s home in Irving, Texas, Thursday, Sept. 17, 2015. Ahmed was arrested Monday at his school after a teacher thought a homemade clock he built was a bomb. He remains suspended and said he will not return to classes at MacArthur High School. AP

DALLAS — The family of a 14-year-old Muslim boy who got in trouble over a homemade clock mistaken for a possible bomb has withdrawn the boy from his suburban Dallas high school.

Ahmed Mohamed’s father, Mohamed El-Hassan Mohamed, told The Dallas Morning News that he has withdrawn all of his children from schools in the Irving Independent School District. Mohamed says the family is still deciding where to send the children to school.

Ahmed has said he brought the clock to MacArthur High School in Irving to show a teacher. Officials say he was arrested after another teacher saw it and became concerned. Ahmed wasn’t charged, but he was suspended from school for three days.

News of the arrest sparked an outpouring of support for Ahmed, including from President Barack Obama.

Read Next
ISIS executes 10 people accused of being gay in Syria—monitor
EDITORS' PICK
Experience clearer calls nationwide with Smart VoLTE
Lorenzana orders review of protocol in handling slain rebels’ remains
PNP probing influx of marijuana in NCR, adjacent provinces
Duterte: May Bonifacio inspire all Filipinos amid COVID-19 pandemic
Arthaland’s property management arm utilizes Amazon Web Services to enhance delivery of service
Smart Prepaid encourages the youth to take their passions to the next level and ‘Live GIGA’
MOST READ
‘What is mine is hers,’ says Matteo on sharing finances with his Popstar Royalty wife
Lorenzana orders review of protocol in handling slain rebels’ remains
DOF to PITC: Return P1 billion in interest on ‘idle’ funds
Robredo to gov’t: Listen to ‘cautious’ Metro mayors on holiday season shift to MGCQ
Don't miss out on the latest news and information.