At the AbbaÕs Orchard School in La Granja Estates in Baungon, Bukidnon province, adolescents are living up to Maria Montessori’s description of them as erdkinder, or children of the land.

Girls and boys, from Grades 7 to 10, happily work with their hands, tending vegetable and herb gardens, fattening pigs, raising poultry and maintaining an aquaponics system (a fish-and-vegetable production scheme relying on the principle of symbiosis).

When not out in the field or busy with academics, the teenagers take turns running the kitchen, preparing lunch for the school community.

In the classroom, the students tackle just as earnestly—like budding entrepreneurs determined to succeed—the task of promoting their group enterprises to an audience consisting of their parents (also known as “investors”), classmates, teachers and guests.

All this is done in a combination of play and learning. Students try to put into practice the theoretical aspects of their education while seemingly engaged in an extended game of playing house. 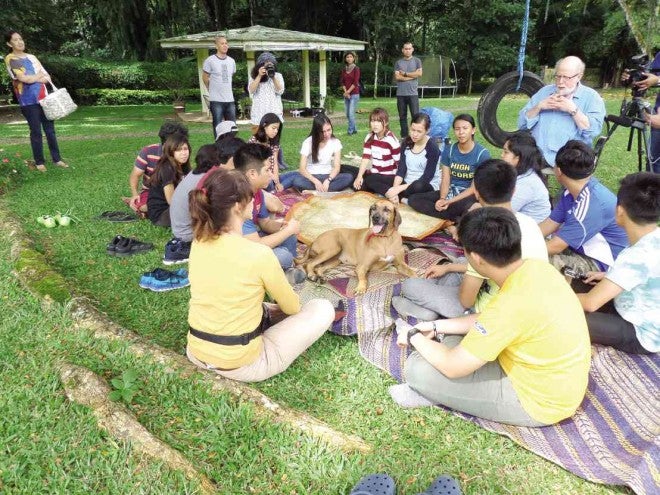 THE GRADE 10 students of Abba’s Orchard Farm School, 16 in all, hear from Perrine how they are working with IPs to promote reforestation and sustainable agriculture, as Kahn listens. LINDA B. BOLIDO

School to these adolescents integrates work, entrepreneurship and stewardship with academics, enhancing students’ numeracy and literacy skills as well as equipping them with practical knowledge.

The farm school, the first Montessori farm campus in Asia, was established by Chris and Ann Barrameda in 2003. Like the other farm schools around the world, it represents the final stage in the vision of trailblazing Italian educator Maria Montessori to provide learning through a seamless integration of classroom and real life.

Montessori had proposed a rural setting in which to prepare an environment for children’s development. In her book “From Childhood to Adolescence,” she wrote, “Work on the land is an introduction both to nature and to civilization and gives a limitless field for scientific and historic studies. If the produce can be used commercially this brings in the fundamental mechanism of the society, that of production and exchange, on which economic life is based. This means that there is an opportunity to learn both academically and through actual experience of the elements of social life.” 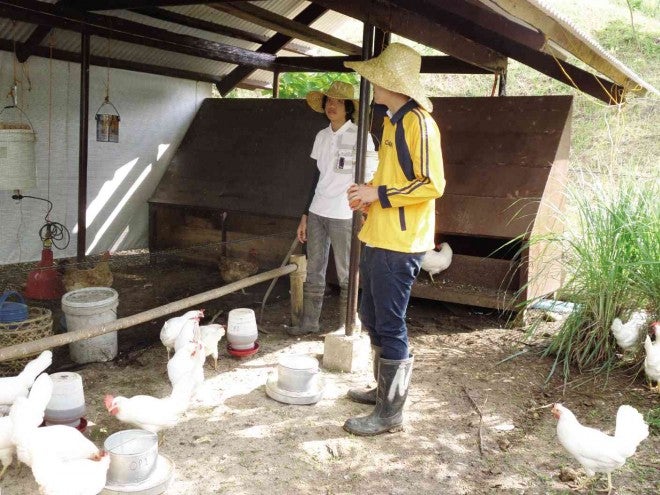 David Kahn, executive director of the North American Montessori Teacher’s Association, expounded on Montessori’s erdkinder idea in a talk at Regents College in London on “Glimpses of the Adolescent.” Kahn had set up the Hershey Montessori Farm School in Ohio that hews as closely as possible to Montessori’s vision.

“A farm school is not about farming. The farm is the prepared environment (a social chrysalis), a safe and warm place in which these vulnerable teenagers can be allowed to change into strong, happy, productive adults,”   he was quoted in Louise Livingston’s “Montessori International.”

A farm setting, as envisioned by the system’s Italian founder, “is the ideal environment for holistic development of teenagers,” Chris Barrameda says. 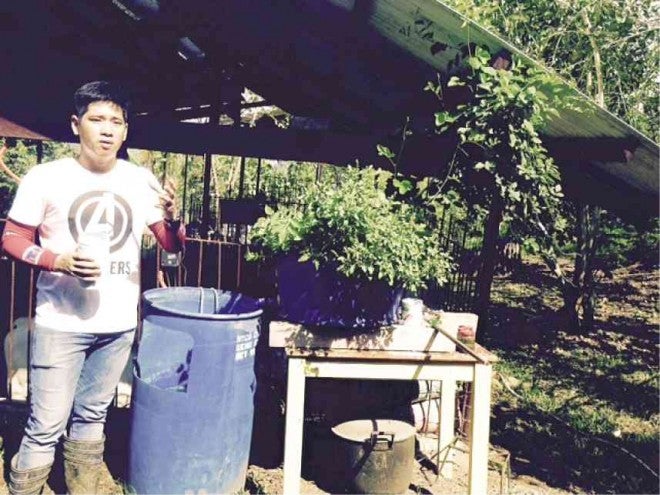 ANDRE Sylee says aquaponics moves dirty water from the fish tank to the vegetable pot, where it is “cleaned” then returned to the tank. CHELO BANAL-FORMOSO

As such, it is a natural extension of the original Abba’s Orchard Montessori School catering to children from nursery to elementary grades that the Barramedas set up in Cagayan de Oro City.

When the couple was planning to put up the La Granja campus, they did not want for good models since farm schools were already becoming more established, particularly in the United States.

Adolescence is a formative time; it is when children begin to develop into the kinds of adults they are going to become, Kahn says during a recent visit to the Abba farm school with his wife Barbara to observe the adolescent students in and out of the classroom.

“Maturity is beginning [and by the time] they are 18, they are fully individuated adults,” he says.

Adolescence for Kahn is not quite the period of youth rebellion and a constant search for ways to be different and contrary. If put in an environment especially prepared for natural development and constantly challenged to excel and develop the highest levels of skill, the adolescent is able to find the highest level of engagement. 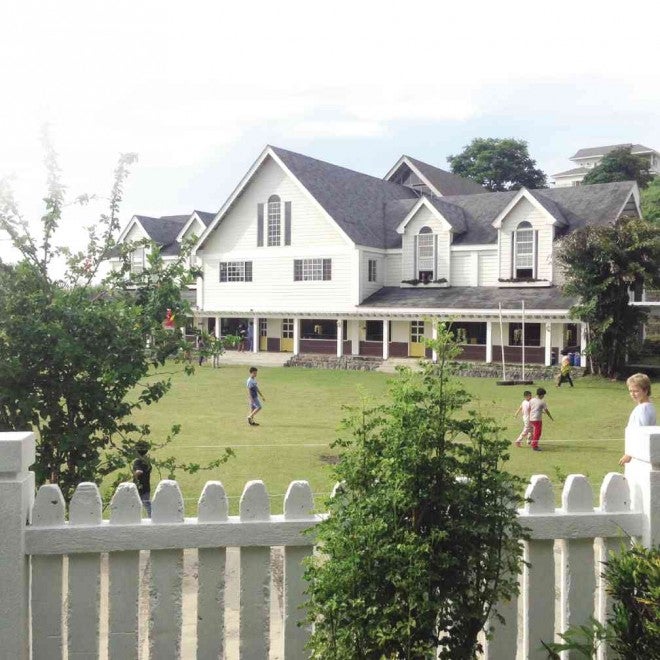 THE SCHOOL building is the centerpiece of the sprawling La Granja campus, surrounded by a white picket fence. CHELO BANAL-FORMOSO

Boredom and apathy set in when challenge is low and there are only a few new skills to learn.

Far from being constantly conflicted individuals, Kahn says “somewhere along the developmental plane, [adolescents] actually feel the ideal impulse to do noble work.” That short window of looking out into the world—of wanting to serve—that moment of idealism has to be captured. But he says adolescents will want and need models to show them the way.

A farm school “calls to them to take care of the environment—how can they be anything else? In a farm school, they see the need to care for family, environment, animal, plants … .”

Their small integrated community prepares the 15- to 18-year-olds for the bigger environment they will eventually join. He says the children see that specific activities have jobs attached to them and, sometimes, as one student finds out, the reality of an occupation is different from what they imagine it to be.

In a dialogue with the faculty, led by erdkinder campus head Jeniffer Pajaron Mabalacad and head of school Noelli Billena Yap, Kahn says the adolescent plane is the second, maybe the last, chance to ensure a child’s proper development.

He says the old development plan ended at 15 years of age but now it is believed to continue in the 15-18 period of development.

“Adolescence is the bridge to adulthood,” he says. Children will naturally go to that plane of maturity when given the right environment. He also believes children want to do good.

What adolescents do, Kahn says, is “contagious,” trickling down to younger children.

At the La Granja campus, academics are handled by teachers trained in the Montessori method. But students get their practical skills from part-time instructors who have actual experience in the work being done.

Curlick Tan, for instance, brings to the school lessons he learns from his own farm. A sculptor, Tan also teaches self-expression.

Students also go further afield to expand their knowledge. On the Hineleban Foundation farm in Tuminugan, Bukidnon, Renee Araneta Perrine shows them how the foundation is helping indigenous populations (IP) adopt more sustainable farming methods and market their products. The foundation also works with the IPs in reforestation.

Kahn says that Montessori education need not extend to the tertiary level. “By that time, the formation of the individual is complete and independent learning has been mastered,” he says.

Besides, there are so many diverse universities and colleges, he says. Given so many possibilities, what is important is to choose the right university, to match the student’s interests and aptitude.

Visit www.theabbasorchard.com. Abba’s Orchard also has high schools in the cities of Antipolo, Cebu and Davao.