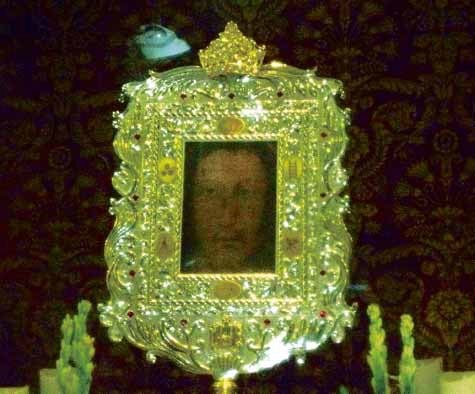 ‘FAC EOF JESUS’ A reliquary displayed at Immaculate Conception Parish Church in Nampicuan, Nueva Ecija province, holds a replica of a cloth claimed to have been used to cover the face of Jesus after his death and bear an imprint of his face. ARMAND GALANG/INQUIRER CENTRAL LUZON

NAMPICUAN, Nueva Ecija—A replica of the cloth claimed to have covered the face of Jesus Christ after his death has changed the lives of many people here after it was enthroned at a parish in this town of about 16,000 people a year ago, a Catholic Church official said.

San Jose Bishop Roberto Mallari, during the first anniversary of the enthronement of the Holy Face of Jesus of Manoppello on Wednesday, urged people drawn by the relic to aspire for spiritual growth and to care for the vulnerable.

“Obviously, we see so many physical developments, we also see so many people involved in the parish. We also heard of stories of conversion, healing and of greater involvement in parish activities,” Mallari said in his homily.

Roberta Cruz, 84, who traveled for more than two hours from Sta. Rosa town to join the celebration, said faith gave her strength to be able to run a small business and send her 10 children to school after her husband died in 1979.

“I will not let this chance to visit the relic pass,” she said.

Nelson Gonzales, municipal tourism officer, said the influx of pilgrims since the enthronement on Sept. 16 last year had contributed to the economic activity in the place.

The relic is a “first degree” replica of the Holy Face of Manoppello, said the parish priest, Fr. Christian Magtalas.

The original can be found at the Basilica del Volto Santo (Basilica of the Holy Face) in the Abruzzo region of Italy. The original is open for public viewing and veneration.

Paul Badde, a German investigative journalist and author of the book, “The Volto Santo” (Holy Face), attended the celebration.

Badde said that the Shroud of Turin was the burial shroud and that the Veil of Manoppello was the facial cover of Christ. The shroud, he said, showed the face of the “dead Christ” while the veil displayed “the face of the resurrected Christ.”

Church officials said the replica was brought here by Fr. Carmine Cucinelli, the official caretaker of the original relic in Manoppello, upon the proposal of Daisy Nieves, a Filipino devotee who suffered from diabetes and visited the Manoppello shrine for at least 10 times in 2013.

When Cucinelli got the approval of his archbishop for a 12-day tour of the replica in the United States and the Philippines starting Sept. 2, 2014, couple Ernest and Lenlen Alzate, who are natives of Nampicuan and friends of Nieves, requested that the relic be brought here aside from the original schedule in Metro Manila.

Magtalas, the Alzate couple and Nieves appealed to Manoppello church authorities to include this town in the visit of the relic. Magtalas said the Catholic faithful here started reciting 4,000 “Hail Marys” on two occasions, lasting two hours each, so their request would be granted.

Bishop Mallari said the Nampicuan parish could have been too “lowly” to host the relic. But this, he said, proved the wisdom of God, “who chooses the weak to shape the strong.”

He described the relic as “the most studied relic by scientists.”

“This experience tells us of God’s continual love and preference for the poor, especially as the good shepherd. In short, these words are a summary of the whole divine [plan] like our blessed Mother Mary, the community here at the Immaculate Conception Parish is privileged to be called and chosen to take care of this relic of the veil of the Holy Face despite our lowliness,” he said.

Apart from the Eucharistic celebration, pilgrims and the Catholic faithful here joined Mallari, Tarlac Bishop Florentino Cinense and visiting priests in inaugurating the Fountain of Mercy, which also features images of the Holy Face.

Mallari encouraged parishioners to pray through the Virgin Mary that they would be able to “easily recognize Jesus in our poor brothers and sisters, and our parish community will become a complete expression of God’s mercy to everyone, especially the poor, the vulnerable, the young and the children.”