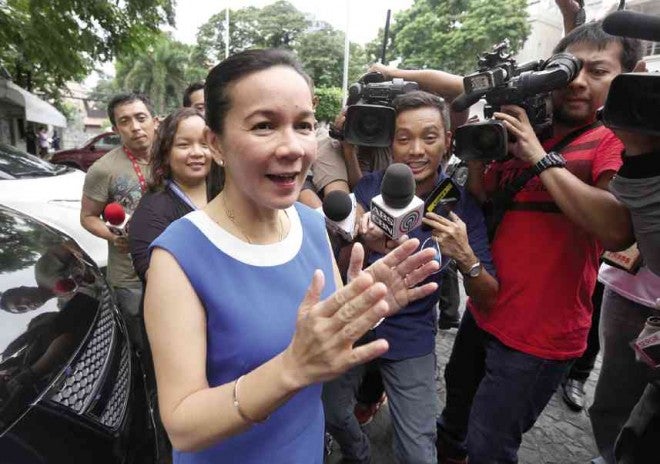 Senator Grace Poe on Sunday urged the Department of Transportation and Communication (DOTC) to ensure that the rehabilitation of the facilities of the overburdened Metro Rail Transit (MRT) system will be finished on schedule.

The senator, who recently announced her intention to run for president in the 2016 polls, said that the DOTC cannot fail to deliver its promise of rehabilitating the MRT on time as thousands of Filipinos depend on it daily.

“The DOTC cannot bungle this. It should ensure that the new train cars will be delivered on time, that the elevators and escalators will work, and even the comfort rooms will be functional. Our workforce, majority of whom take mass transport, should not have to endure the current conditions longer than they should,” Poe said in a statement.

Heading the Senate Sub-committee on Transportation, Poe reminded the DOTC to adhere to the timeline it presented during the hearings on the MRT conducted last February:

Poe said that of the P4.2 billion needed for the three-year maintenance of the MRT, P1.2 billion has already been earmarked for rehabilitation of various facilities in the MRT such as elevators in its stations and its signaling system.

“That is P1.2 billion in taxpayer’s money that the DOTC is spending. Commuters are well within their rights to demand that what needs to be fixed will be fixed, and the repairs and upgrades will be done on time,” Poe said.

She urged Filipinos to continue reporting the glitches in the MRT as well as their experience while riding its trains.

Read Next
Pope Francis to give mass on Havana’s Revolution Square
EDITORS' PICK
DOH checking if 3 COVID cases due to Omicron
PH falls short of target of 3-day nat’l vax drive by 1M jabs
Holidays made best with Acer’s ‘Holidays at Home’ raffle promo
Smart offers wireless fiber-like speeds to Filipino homes with country’s first 5G Prepaid Home WiFi
Two more sites at Robinsons Malls for temporary offsite passport services
Gov’t fine-tunes alert level system
MOST READ
Isko’s messaging takes a turn as he commends Duterte
Roque ‘hurt’ after presidential aspirant did not adopt him in Senate lineup
Pharmally’s Twinkle Dargani in tears when asked about missing documents
Gordon to Duterte: ‘How dare you ask for Filipinos’ vote when you failed them?’
Don't miss out on the latest news and information.