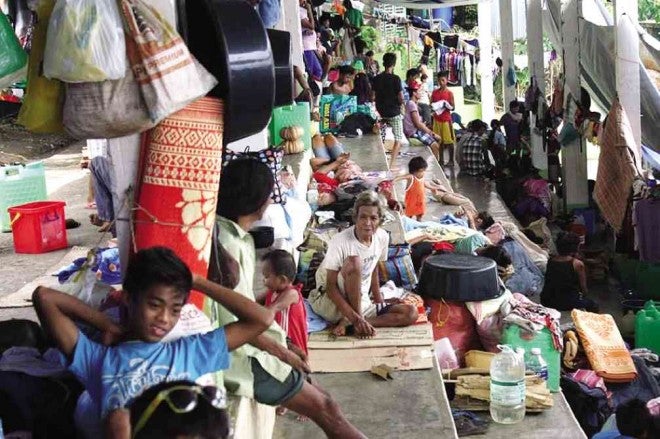 Manobo infants are most at risk in the evacuation center at the Tandag City gymnasium in Surigao del Sur province. ALEX BALUYUT/CONTRIBUTOR

Ten volunteer artists led by a veteran photographer braved one of Mindanao’s conflict areas with a cache of pots and ladles, and probably cameras, on a humanitarian mission to serve hot meals to some 3,000 Manobo folk seeking refuge from armed men in their communities at a sports complex in Tandag City, Surigao del Sur province.

Since Sept. 1, indigenous families from several municipalities in the province have been arriving at the Tandag stadium to escape the paramilitary group Magahat-Bagani, which was reportedly behind the killings of “lumad” leaders Emerito Samarca, Dionel Campos and Jovelo Bello Sinzo in Lianga town.

The government has denied any involvement in the killings.

Hearing the news from his house in Los Baños, Laguna province, photographer Alex Baluyut, 59, revived his Art Relief Mobile Kitchen (ARMK) to provide comfort food to the evacuees. In no time, he and his team were on a plane to Surigao del Sur to supervise a three-day feeding starting on Sept. 18.

In the 1980s, the photographer produced a documentary, which, he said, gave him the opportunity to stay in lumad communities and to draw “wisdom and inspiration” from the people.

“It’s not easy to live in a conflict zone,” Baluyut said, adding that the presence of humanitarian volunteers might help them recover easily. He believes that ARMK is not only filling up empty stomachs “but uplift(ing) (the refugees) psychologically.”

It was the same idea that pushed the group to start its feeding program in 2013 for survivors of Supertyphoon “Yolanda” (international name: Haiyan) that ravaged the Visayas. It opened its kitchen at Villamor Air Base in Pasay City, where the survivors arrived, and later went around the storm-stricken provinces.

The difference this time, Baluyut said, was going into a man-made conflict zone, citing security concerns among the volunteers. “We made sure the volunteers knew what they’re going into and like any humanitarian organization, we remain neutral,” he said.

Baluyut said ingredients would come from the localities while the rest of the cooking equipment, such as burner and large pans, would be flown in from Tacloban City in Leyte province.

The group left the kitchen utensils in Tacloban after the Yolanda mission for the use of the community. This would also be done in Tandag to enable the locals to cook comfort food among themselves should another disaster strike.

After all, “that’s the idea of a community kitchen,” Baluyut said.