Trump condemned for not correcting statement Obama is Muslim 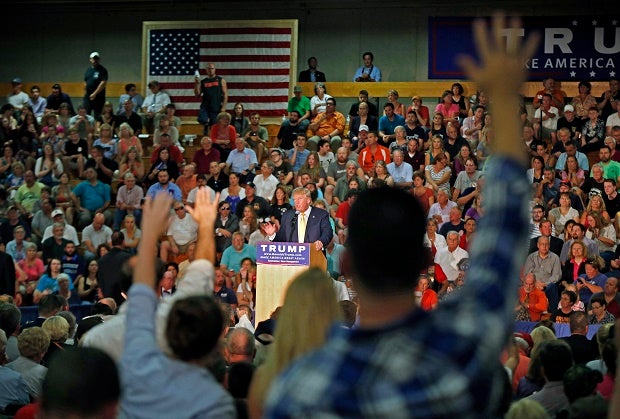 ROCHESTER, New Hampshire — Presidential candidate Donald Trump drew fire from Democrats and some Republicans after declining to rebuke a questioner at a town hall event who insulted Muslims and wrongly said President Barack Obama is a member of the faith.

The question to Trump, the front-runner in the 2016 Republican campaign, came Thursday night at a town hall in Rochester, New Hampshire. The first person the billionaire real estate mogul called on said, “We have a problem in this country. It’s called Muslims.”

“We know our current president is one,” the man said of Obama, who is Christian. “You know he’s not even an American.”

Trump, a driver of the “birther” movement that falsely claimed Obama was born outside the US, first responded with feigned exasperation — “We need the question,” he said, to laughs — before letting the man continue.

“We have training camps growing where they want to kill us. That’s my question,” the man in the audience continued. “When can we get rid of it?”

Trump did not dispute the man’s assertion that militants operate training camps on American soil and said he’d heard others raise the issue.

“He knew, or he should have known, that what that man was asking was not only way out of bounds, it was untrue,” said. “He should have from the beginning repudiated that kind of rhetoric, that level of hatefulness.”

At the White House, press secretary Josh Earnest said Friday it was unfortunate that Trump “wasn’t able to summon the same kind of patriotism” that Republican Sen. John McCain showed in 2008, when he took the microphone away from a woman who said she didn’t trust Obama because he was Arab.

“Mr. Trump isn’t the first Republican politician to countenance these kind of views in order to win votes,” Earnest said. “That’s precisely what every Republican presidential candidate is doing when they decline to denounce Mr. Trump’s cynical strategy.”

Graham tweeted a link to a story about how he condemned a racist comment during a political event earlier this year in Iowa, and then beat the man who made it in a game of pool.

New Jersey Gov. Chris Christie said that “if somebody at one of my town meetings said something like that, I would correct him.” But Christie, appearing Friday on NBC’s “Today” show, also said it is up to Trump to decide how to handle such situations, adding, “I’m not going to lecture him about what to do.”

Others in the Republican field didn’t want to talk about it at all. At a campaign event in South Carolina, Texas Sen. Ted Cruz didn’t respond to questions about Trump or the president’s faith, saying “President Obama’s faith is between him and God.”

Cruz said “we’ve seen the rights of Christians undermined all over the country” under Obama, adding that he “has at times acted as an apologist for radical Islamic terrorists.”

Former Florida Gov. Jeb Bush told an audience in Michigan that Obama is “an American. He’s a Christian. His problem isn’t the fact that he was born here or what his faith is. His problem is he’s a progressive liberal that tears down anybody that disagrees with him.”

Trump did not respond to shouted questions about the exchange as he left the event, but his campaign released a statement in response that focused on the treatment of Christians in the country.

“The media wants to make this issue about Obama. The bigger issue is that Obama is waging a war against Christians in this country,” it read. “Christians need support in this country. Their religious liberty is at stake.”

Trump campaign manager Corey Lewandowski said that the room was noisy and that Trump had trouble hearing the question. But the questioner was speaking into a microphone, and his remarks could be heard clearly by several journalists sitting near the back of the gymnasium.

Trump declines to correct man who says Obama is Muslim