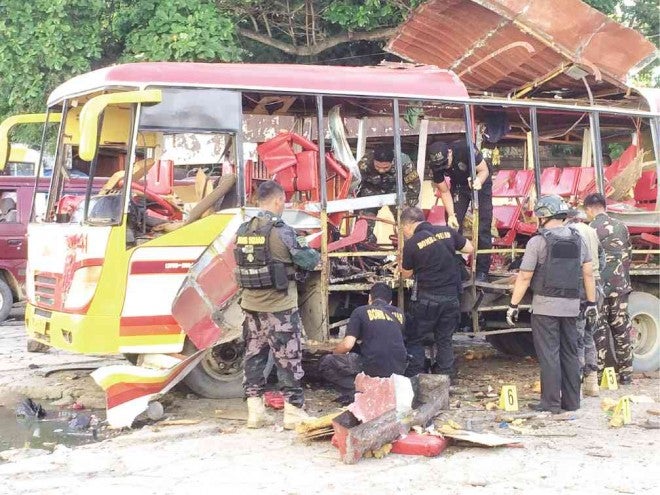 MILITARY and police bomb experts inspect the blasted bus in Zamboanga City where an 11-year-old girl died and at least 31 others were wounded on Friday. JULIE ALIPALA/INQUIRER MINDANAO

ZAMBOANGA CITY, Philippines—The military has blamed the Abu Sayyaf as behind the bombing incident that killed one person and hurt at least 31 others at a privately owned bus terminal here on Friday.

Extortion was the primary motive, Col. Nixon Fortes, commander of the Task Force Zamboanga, told the Inquirer. He said the group of Abdul Aziz was behind the extortion and bombing.

The still undetermined type of explosive went off aboard a bus as it was loading passengers around 2:30 p.m. on Friday, the police said.

Fatima Alipara, 11, was confirmed dead after being rushed to the Zamboanga City Medical Center (ZCMC), according to Abby Marquez, ZCMC spokesperson.

Alipara was among the three victims initially reported to have been critically wounded in the blast, says Marquez. She was mistaken for a teenager, she added. Twenty-three others were being treated at the ZCMC, Marquez confirmed.

Five others were brought to Brent Hospital and three to the Puericulture Hospital, Supt. Jomarie Albarico, commander of the central police office, said.

Albarico said two other injured victims, including a female college student, were in critical condition.

Chief Insp. Joel Tutuh, spokesperson of the city police office, said a bus of D’Biel Transportation Corp., which was bound for the city’s west coast area, including the villages of Labuan, Ayala and Recodo, was waiting for passengers inside its terminal on Calixto Street when the explosion took place. 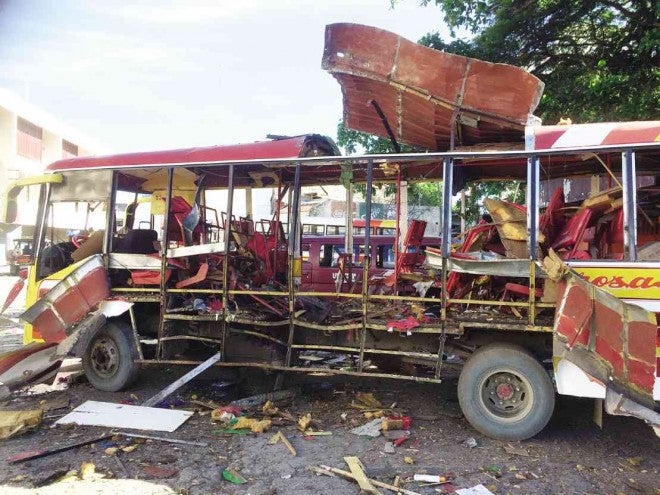 TERRORISTS DID THIS This is all that remains of the D’Biel bus bound for Zamboanga City’s west coast area, after a bomb allegedly planted by the Abu Sayyaf Group (ASG) in the middle portion of the bus (see arrow) exploded on Friday. An 11-year-old girl died, while at least 31 others were injured in the blast that the bus owner said was the result of an extortion attempt by the ASG. (Story in Across the Nation, Page A10.) JULIE ALIPALA/INQUIRER MINDANAO

Among the victims were the five people on board and about 20 others, who were just milling nearby, Albarico said.

“The bomb went off aboard the bus, most probably at the middle portion,” Albarico said in explaining why the range of the explosion was quite broad that it hit those standing several feet away from it.

“The ASG (Abu Sayyaf Group) admitted they perpetrated this crime by sending a text message to the Biel family,” Fortes said.

Abdul Aziz, he said, has been demanding P500,000 from the bus company owner. Police investigators said they now “have strong lead as the suspected bomber was captured clearly in one of the closed-circuit television cameras at the terminal.

The man, who wore a cap, alighted from the bus, made some calls and hurriedly left the site shortly before the blast, they said.

It was the second of such attack against the bus company in recent years, which Albarico said could have stemmed from the failure of the still unidentified suspects to extort money from the Biel family.

In September 2013, three bus passengers were also killed while another one was injured when a bomb exploded aboard a D’Biel bus awaiting passengers at the company’s Labuan depot, some 34 kilometers away from the city’s center.

The bus company has been reportedly the subject of extortion by unidentified men, who warned of bomb attacks if their demands were not met.

In February 2014, two suspected members of an extortion gang were arrested in an entrapment operation conducted by the city police.

The two suspects, Jomar Pillay and Gerwin Luania, had allegedly warned the bus company of bomb attacks unless their demand was met.

The company manager pretended to yield to the demand and agreed to meet the two suspects.

Unknown to them, the police were just waiting for them to show up at the agreed place of meeting. Julie Alipala, Inquirer Mindanao