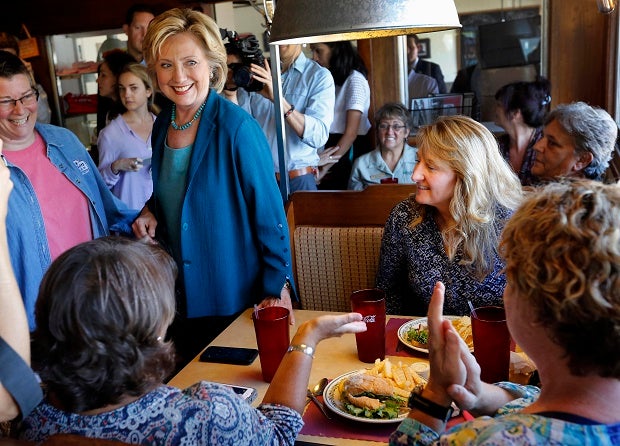 CONCORD, New Hampshire — Democratic presidential candidate Hillary Rodham Clinton warned congressional Republicans on Thursday that they would endanger the economy if they shut down the federal government in an effort to block funding for a non-profit women’s health organization that provides abortions.

Less than a day after the Republican field gathered for their second debate, the Democratic front-runner seized on promises by some of her would-be rivals to defund Planned Parenthood — even if the move results in a politically treacherous government shutdown.

“I would hope that the Republicans, and particularly the Republicans in the House led by Speaker Boehner, would not put our country and our economy in peril pursuing some kind of emotionally, politically charged partisan attack,” she said in an interview Thursday with CNN. “That would be a very, very unfortunate decision.”

At a town hall meeting, Clinton said it was “heartbreaking to think one more time the Republicans in Congress are thinking about shutting our government down” over funding for Planned Parenthood.

Clinton kicked off a three-day swing through New Hampshire as polls show her once-commanding lead over Vermont Sen. Bernie Sanders in the state’s 2016 primary has evaporated. In a touch of symbolism, Clinton was joined by Vermont Gov. Peter Shumlin, a Democrat who endorsed her over Sanders.

Clinton’s campaign said New Hampshire Gov. Maggie Hassan would endorse Clinton on Friday at an event at the University of New Hampshire.

Clinton said in a statement earlier that by pledging during Wednesday’s Republican debate to defund Planned Parenthood, the Republican presidential field had continued what she called a “race to the bottom” on issues of women’s health and rights.

She said Republicans at the three-hour forum ignored domestic issues like college debt, equal pay and stagnant wages in favor of partisan rhetoric.

“This is just the usual back-and-forth political attacks, the kind of things you say when you are on a debate stage and don’t have much else to say,” she said on CNN. “This is just the silly season.”

Republican leaders are trying to avoid a politically damaging government shutdown as some conservative lawmakers demand to block federal spending on Planned Parenthood.

The showdown over a stopgap bill needed to keep the government open comes after the summer’s release of videos secretly recorded by abortion foes who say Planned Parenthood illegally profited from selling tissue from aborted fetuses to medical researchers. Planned Parenthood officials deny the allegations.

Earlier, Clinton listened to the stories of people recovering from drug addiction and family members who lost loved ones to substance abuse. At a town hall meeting in Laconia, she promoted a $10 billion presidential campaign initiative to address drug and alcohol abuse, which has roiled many rural towns in New Hampshire.

The former secretary of state said she has been surprised by the number of people who have talked to her about painful addictions hurting families and communities. Her campaign recently rolled out plans to help states and communities offer more treatment and access to recovery centers and to shift the emphasis from incarceration to treatment.

Republican candidate Carly Fiorina brought up her stepdaughter’s 2009 death from drug abuse. “We need to tell young people the truth. Drug addiction is an epidemic, and it is taking too many of our young people,” she said.

Former Florida Gov. Jeb Bush, who admitted that he smoked marijuana in high school, said the country faces a “serious epidemic of drugs that goes way beyond marijuana.”