Heart Evangelista troubles with family over; kin now 100% for Chiz

In the end, the heart won over initial doubts.

Despite early reservations about accepting Sen. Francis “Chiz” Escudero into the family, Heart Evangelista’s parents and siblings were “very excited and very supportive” of the senator during his declaration of his 2016 vice presidential bid on Thursday.

“They are very excited and very supportive,” she said of her mother Cecile Ongpauco, and siblings Mitch and Camille who came to the event.

Her father, Reynaldo, was sick and could not make it, the actress said.

“He called Chiz earlier and said he couldn’t attend because he’s been hospitalized recently. But he’s also very supportive and is watching the event on TV, so it’s fine,” Evangelista said, adding that she did not need to convince her parents to get their support for her husband’s political plans.

The couple’s love story was closely followed for its triumph over several odds, the biggest being the Ongpauco matriarch’s vocal disapproval of the match. Among the family’s objections was the 16-year age gap between the couple, with the actress just turning 30 against Escudero’s 46 years.

Despite her age, Evangelista’s parents said she was still immature and “thinks like a young girl” who was easily “manipulated into going against her family.” In one interview, the actress’ mother voiced suspicions about Escudero “financially manipulating” her daughter.

The Ongpauco couple was conspicuously absent during their daughter’s lavish wedding to Escudero on Balesin Island, Quezon province, in mid-February this year.

Escudero had his own baggage: an earlier marriage that produced twins was annulled in 2012, with a court order transferring some of his assets to his twins and significantly reducing his net worth.

None of that drama was evident during Thursday’s announcement, as two generations from both the Escudero and Ongpauco families gave their blessings to the political union between Sen. Grace Poe, who declared her presidential bid on Wednesday, and her newly minted running mate, Escudero. 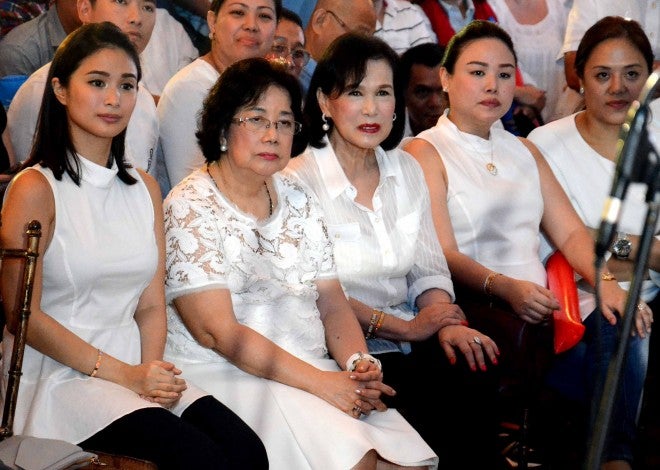 Escudero’s mother, Sorsogon Rep. Evelina Escudero, who sat beside her balae, Cecile, described the ties between the two families as “peaceful.”

“I guess they have no choice but to support their daughter,” she said of her in-laws. “They love their daughter the same way we love our son,” she added.

Confirmed Heart’s sister, Mitch Ongpauco in a separate interview: “We’re behind (Escudero) all the way, 100 percent.”

Her father was as supportive of his son-in-law, she said, adding that she would, “of course,” campaign for Escudero.

Her show biz friends were as supportive, Evangelista said, adding that she and Escudero had agreed that she would represent him in campaign activities he might not be able to attend.

Among those who came to support the Poe-Escudero tandem at Club Filipino were Poe’s mother, actress Susan Roces, as well as Evangelista’s close friend and Poe’s half sister, TV-movie star Lovi Poe.

Political personalities were predictably present as well, including Valenzuela Mayor Rex and his brother, Alay Buhay party list Rep. Wesley Gatchalian, and former Zamboanga del Norte Rep. Romeo Jalosjos, who said he had always been supportive of Poe and Escudero.

He had already told Vice President Jejomar Binay that he could not support him next year, Jalosjos added.

“I will be (betraying) show biz (if I don’t support Poe and Escudero),” said the former congressman whose family was involved in the production of the long-running noontime television show “Eat Bulaga.” Jalosjos is one of the founders of TAPE (Television and Productions Exponents Inc.,) which produces the noontime show.

Poe’s father, the late action king Fernando Poe Jr., also acted in one of the television shows his family had produced, Jalosjos said.

“I will be a traitor if I turn my back on Grace. Her family is very close to us,” he said.

While he has no political plans for next year, Jalosjos said he would be campaigning for his two sons, one of whom will run for Congress while another will run as governor of Zamboanga Sibugay. He’ll also support his brother who is seeking to represent Zamboanga, the former congressman said.

The Inquirer also learned that award-winning actress Nora Aunor, who was not present at Escudero’s declaration, was supporting Poe’s presidential bid. “Of course, I’d be the first to support her,” Aunor said.

The crowd who cheered Escudero on his announcement included students from the University of the Philippines (UP), who stood out in red shirts with the message, “Gobyernong may puso” (government with a heart).

“This was our idea,” said Hans Marin, a third year Electronics and Communications Engineering student at UP. “(We’re wearing) red because Poe’s color is blue,” he added.

Marin said the Alpha Phi Beta law fraternity was “solid” in its support for Escudero, who once served as lord chancellor of the group.

Added Jeric Carolino, another UP student and a member of the fraternity: “It’s like ownership. Whatever Chiz’s ideas are—his ideology, beliefs, decisions, aspirations—as his ‘brods,’ we are here… His dream is ours. And we are here to help him achieve that dream.” With a report by Kristine Felisse Mangunay and Louie Rivera

Heart all out for Chiz but no dancing and singing

Heart Evangelista’s parents break down: ‘Escudero is an opportunist’