Hero-brothers almost forgotten, even in hometown 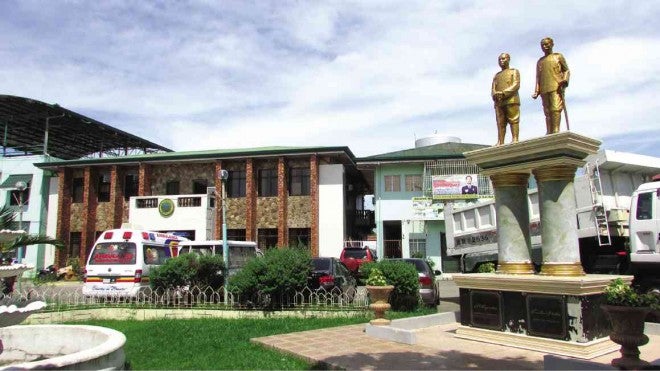 THE MONUMENT to the Riego de Dios generals of the Philippine revolution against Spain stands at the plaza of Maragondon, Cavite province, but many town residents have yet to know about their exploits. VAUGHN ALVIAR

MARAGONDON, Cavite—On Sept. 7, 2013, crowds lined the roads to witness the transfer of the remains of Emiliano Riego de Dios from the Libingan ng mga Bayani in Metro Manila to his new resting place in a monument of him and his brother, Mariano, at the town plaza.

Emiliano, Mariano and a third hero-brother, Vicente, led residents in Maragondon and in the neighboring towns of Cavite and Batangas provinces in the Katipunan’s fight against the Spaniards in the late 1890s.

Three days earlier, from Manila to this town, Rustico L. Narvaez began distributing some 5,000 photocopies of a pamphlet containing the

biographies of the Riego de Dios brothers and titled “Ang Pagbabalik sa Maragondon (The Return to Maragondon),” representing a yearning of generations of the clan to bring home their heroes.

Emiliano died in 1926, and Katipunan leader Emilio Aguinaldo had requested that he be buried at the Libingan ng mga Bayani.

Narvaez, 52, an industrial engineer and a descendant-chronicler of the heroes, retrieved the original pamphlet from the heaps of historical photos and documents in his black, leather messenger bag and showed it to the Inquirer.

From Manila to Maragondon, in one of two parades in the Riego de Dios brothers’ honor, pupils were led out of their classrooms to the roadside, holding small Philippine flags. When the carroza bearing the Katipunan general’s remains passed by, they waved the flags while droves of curious men and women watched closer.

A second parade, around the town, was held on Sept. 7 or Maragondon Day and town fiesta, which coincided with Emiliano’s birthday.

“They all had to know what the parade was about,” Narvaez told the Inquirer in explaining why he had the flyers reproduced.

While addressing an immediate need, he acknowledged that his information materials were also meant to encourage schools in Cavite to acquaint their students with the rich history of the province.

Local heroes were treated as second-tier characters, Narvaez said. “Bakit ganoon? (Why?) Many heroes are left out … Like the Riego de Dios brothers, they are becoming limot na bayani (forgotten heroes).”

“The pressure for recognition mostly comes from the heroes’ families,” he said, recounting how he rallied the National Historical Commission of the Philippines and the local government to support their event.

Their appeals should transform from a family concern to a serious social discussion, most especially in the education sector, he added.

“I wish the schools here could relive the history of the Riego de Dios brothers so that the coming generations will still remember them. I wish they could be mentioned in textbooks, made into lessons.”

Maragondon observes Sept. 7 as a holiday in honor of Emiliano, and dedicated streets and a monument to him and Mariano; but those who benefit from or see these every day have little or no knowledge of them, Narvaez lamented.

There are many points of discussion regarding the brothers, as questions are still flailed at them.

For example, Narvaez said, critics would downgrade their role to the cause of liberation because they came from well-off families.

Many continue to debate whether Emiliano, along with comrades Mariano Trias and Artemio Ricarte in the Katipunan’s Magdiwang faction, betrayed their Supremo, Andres Bonifacio, when they joined the Cabinet of Aguinaldo, from the Magdalo faction. He was also one of those who arrested Bonifacio in Indang town, also in Cavite.

Mariano was a member of the military tribunal that meted out the death penalty to Bonifacio and his brother (He and two others did not sign the decision, Narvaez reiterated).

The puzzlement around Vicente had to do with his rank of colonel, while his brothers were named generals.

Francis Gealogo, a history assistant professor of Ateneo de Manila University and who is related to the Alvarezes of the revolutionary movement in Noveleta, said local history was one of the new features of the K-12 curriculum.

The Araling Panlipunan curriculum guide of the Department of Education notes that Grade 2 pupils will touch on their communities, using, among others, “mga saksi ng kasaysayan tulad ng tradisyong oral at mga labi ng kasaysayan (witnesses of history like oral tradition and remnants of the past).”

Further, Grade 3 studies would be localized to provinces and regions.

All these, Gealogo noted, would address a longtime need to change “Manila-centric national history and recognize other localities so that history could be placed closer to the people.”

“How do you expect a child from Sulu or Camiguin, for example, to relate to [mentions of faraway events]?” he said.

The modification offers an opportunity for people in the communities—from school teachers to citizens—to write or retrieve histories, although not without dangers.

“The challenge of detachment and advocacy are perpetual for historians … For whom and to what end [are you telling the story]? You should always ask that … Is it for the few or for the masa?” Gealogo said.

He cautioned descendants of local heroes to distance themselves from the writing process so that familial biases may be avoided.

If local history does get a spot in the new DepEd curriculum, Narvaez has one less thing to worry about. He could concentrate on figuring out who in their family’s younger generation would inherit his black messenger bag.

“I’m worried that after our generation, no one would take interest in the history of our forefathers. I hope one of them would,” he said. In the meantime, he keeps reminding them that the remains of Mariano were buried with a capsule containing photos of their heroic great grandparents.

“I thought to do that so that if they ever excavated there, they would be able to see the pictures still intact, so they may remember where they come from,” Narvaez said.