Heart Evangelista and family ‘100%’ for Chiz 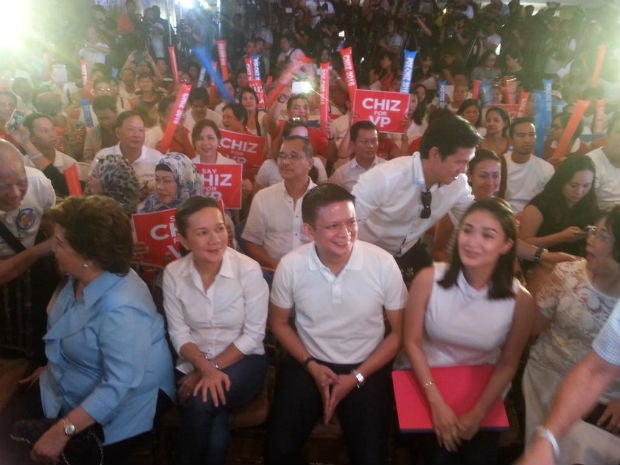 PHOTO by Chona Yu/Radyo Inquirer 990AM

The entire family of actress Heart Evangelista gave their all out support for her husband, Senator Francis “Chiz” Escudero, who declared his vice presidential bid in 2016.

“All is well that ends well,” Evangelista told reporters shortly after Escudero’s declaration at the Club Filipino in Greenhills, San Juan, on Thursday.

Aside from Heart, family members who came to Escudero’s declaration were her mother, Cecille Ongpauco, and siblings, Mitch and Camille.

Heart said her father, Reynaldo, could not attend because he was sick.

Heart said she and Escudero already agreed that she would represent him in activities that he would not be able to go to once the campaign period starts.

Mitch confirmed that the whole Ongpauco family was behind Escudero.

“We’re behind him all the way, 100 percent,” she said in a separate interview.

She also echoed Heart’s statement that their father was also behind Escudero’s vice presidential bid.

“He’s actually sick right now. He’s at home but he’s watching. He’s behind him all the way,” Mitch added.

Asked if they would campaign for Escudero, Mitch said: “Of course, of course.”

Escudero’s mother, Sorsogon Representative Evelina Escudero, who sat beside Heart’s mother during the event, described the ties between the two families as “peaceful.”

Asked if she was happy about it, the lawmaker said: “Syempre, everything is peaceful na.”