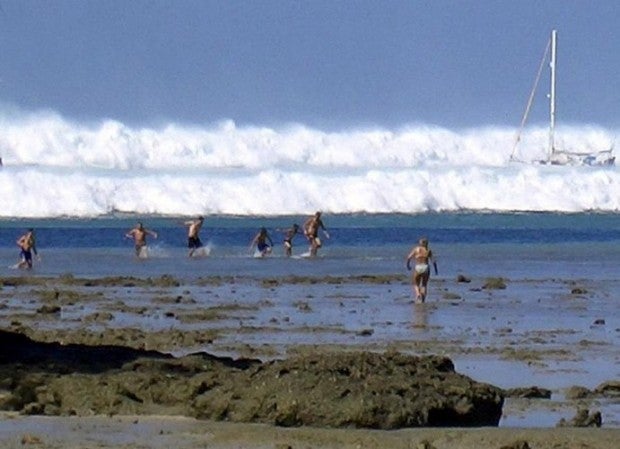 Tourists flee as the first of six tsunamis that hit Hat Rai Lay Beach in Thailand roll closer in this file photo dated December 26, 2004. The Phivolcs has told residents of 21 coastal provinces in the Philippines to keep watch and be alert after an 8.3-magnitude quake hit the sea off Chile in South America. AP

DAVAO CITY—More Mindanao provinces had been included in the tsunami watchlist of the Philippine Institute of Volcanology and Seismology (Phivolcs) following the Chile earthquake.

Jesusa Timbang, Davao Oriental provincial disaster response chief, said the province was now among 20 areas in the country that Phivolcs had alerted for possible tsunami strike.
Timbang said the various disaster management councils in the province were also activated, after the Phivolcs advisory.

Phivolcs said the Chile quake has the potential to generate a destructive tsunami that can strike coastline areas in the eastern seaboard.
Aside from Davao Oriental, it also placed Davao del Sur and Davao Occidental under the tsunami watchlist.
Marivic Hubac, executive assistant to Davao del Sur Gov. Claude Bautista, told the Inquirer the advisory was received by the provincial disaster response office early morning Thursday.
Hubac said Phivolcs placed Davao del Sur and Davao Occidental “under continued monitoring for water or sea activity for the next 24 hours.”
“That is due to tsunami threat as a result of the earthquake in Chile,” she said.
Hubac said Bautista, who still has jurisdiction of Davao Occidental, had already ordered village officials in coastal areas to ready their constituents for possible evacuations.
Timbang said residents living in the coast of Davao Oriental had been advised to prepare and monitor, and listen to updates.
No evacuation order was in effect as of yet, she said, but concerned areas had been told to closely monitor their sea waters.
Surigao del Sur Gov. Johnny Pimentel said all concerned government agencies and local government units in his province had been told to prepare for any eventuality as a result of the quale.
“We have already notified all mayors to prepare,” Pimentel said.
Liza Mazo, director of the Office of Civil Defense in southern Mindanao, said all disaster response units in the region had been activated as well and will remain in standby within the duration of the tsunami alert. Frinston Lim, Eldie Aguirre and Karlos Manlupig/RAM