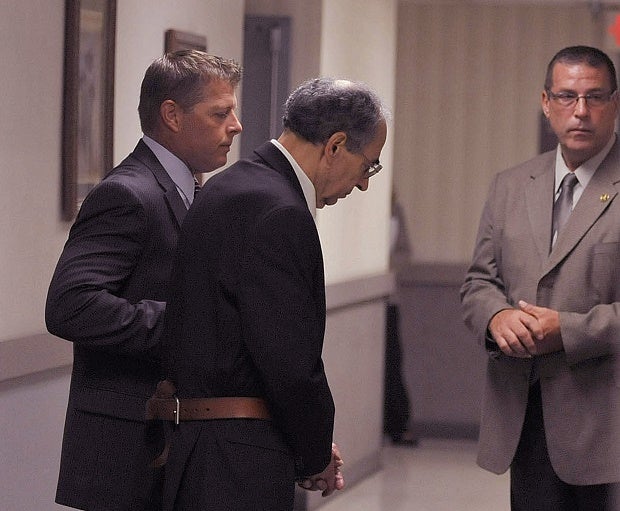 Rev. Joseph Maurizio is led into Federal Court for jury selection in Johnstown, Pa., Wednesday, Sept. 9, 2015, by U.S. Marshals. A key witness in the trial of the U.S. priest charged with traveling to Honduras to molest poor street children during missionary trips has recanted on the stand. AP

JOHNSTOWN, Pennsylvania, United States—A key witness in the trial of a priest charged with traveling to Honduras to molest poor street children during missionary trips has recanted on the stand.

The 24-year-old man testified in a federal courtroom in Johnstown that he was never molested by the Rev. Joseph Maurizio despite prosecution claims that he had been as a 14-year-old boy.

The witness acknowledged accusing the 70-year-old priest during a previous interview with investigators but on Tuesday said he felt pressured to make the accusations. He also testified that Maurizio’s attorney tried to get him into the US to testify in the priest’s favor at an earlier proceeding, but US Embassy officials prevented him from getting a visa.

The Associated Press does not identify people who may be victims of sexual assaults.

Two other Honduran men did testify that the priest abused them, however.

One man, 23, said Maurizio offered him candy so the priest could fondle him. The priest later gave him $500 to have sex when he was 14, he testified.

Another accuser, now 28, said Maurizio asked to take his photo while he and another child, both about 14 at the time, were taking showers. The priest also asked him to undress and take a sexually suggestive picture in 2008 or 2009, when he was an adult, the man testified.

On Wednesday, the government called Alexandra Levi, a Homeland Security interview specialist, to discuss the Honduran culture, which she said can make it difficult for victims of sex crimes to come forward.

Levi called the culture “homophobic” and said Honduran men are concerned about being seen as gay, according to the (Johnstown) Tribune-Democrat.

On cross-examination by the priest’s attorney, Levi denied pressuring the men she interviewed to implicate the priest.

The priest, suspended from Our Lady Queen of Angels Parish in Somerset County, is charged with traveling abroad to have sex with three young boys, which is known as sexual tourism. He’s also charged with illegally transferring $8,000 to a charity to help fund the trips, which ended in 2009.

The priest has repeatedly denied wrongdoing.