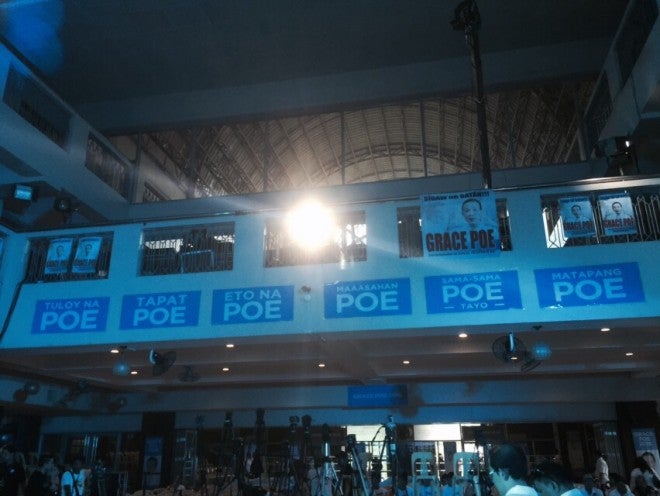 Banners and posters proclaiming support for Senator Grace Poe’s presidential bid all over the Bahay ng Alumni in the University of the Philippines Diliman, Quezon City. Poe is expected to announce her presidential bid this Wednesday afternoon. PHOTO BY MAILA AGER/INQUIRER.net

Supporters of Senator Grace Poe gathered at the Bahay ng Alumni in the University of the Philippines in Diliman, Quezon City on Wednesday for her expected announcement of her presidential bid in 2016.

Early birds at the gathering were members of the Filipinos for Peace, Justice and Progress Movement (FPJPM), who were wearing white shirts bearing the name of their group and the picture of Poe’s late father, actor Fernando Poe Jr. (FPJ), and members of the Great People’s Movement for Progress (GPPM).

Jun Zafra, 60, chairman of FPJPM-Taguig chapter, said they supported FPJ when he ran but lost to detained former President and now Pampanga Representative Gloria Macapagal-Arroyo, and they also supported Grace Poe when she first ran and topped the senatorial race in 2013.

Another chairman of FPJPM in the Bulacan chapter, Arthur dela Cruz, said that they also renewed their support for Poe, whom they campaigned for during the last elections.

But Dela Cruz said their support for the senator was not only because she is the daughter of FPJ.

“Hindi lang po dahil anak siya ng yumaong FPJ,” he said, adding that they were hoping that Poe could help uplift the lives of many poor Filipinos. JE