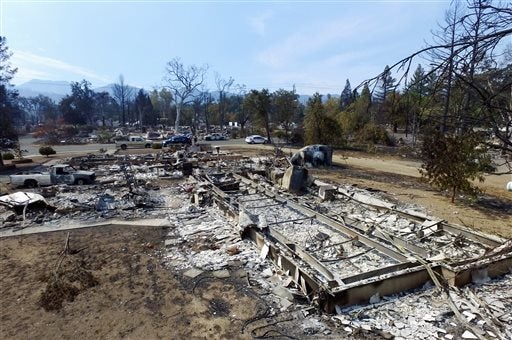 This image taken with a drone shows a street in Middletown, Calif., where several homes were completely destroyed by the Lake County wildfire, Tuesday, Sept. 15, 2015. The fire that sped through Middletown and other parts of rural Lake County, less than 100 miles north of San Francisco, has continued to burn since Saturday despite a massive firefighting effort. (AP Photo/Brian Skoloff)

MIDDLETOWN, California — Some residents cried as they walked through the rubble of their homes while others shared amazing stories of survival as more people returned to their houses Tuesday and surveyed the twisted metal and smoking ruins left behind by a devastating California wildfire.

Gary Herrin sobbed as he walked through what had been his childhood home in Middletown.

“Yep, grew up here, was able to walk to school from here. Many friends lived close by,” Herrin recalled, looking around. “There’s a lot of good people here, but it’s a ghost town now, it’s really eerie.”

His brother had been living in the home and members of his extended family resided nearby.

“I go to my brother-in-law’s house, my niece’s house, and there’s nothing, nothing, ashes,” Herrin said.

A number of people saw the devastation for the first time since the massive flames sped Saturday through rural Lake County, less than 100 miles (160 kilometers) north of San Francisco.

Aided by drought, it has consumed more than 104 square miles (269 square kilometers) and was 30 percent contained.

Fire investigators working to determine what caused the massive blaze have narrowed their focus to an area in the community of Cobb, where the blaze was first spotted, said California Department of Forestry and Fire Protection spokesman Daniel Berlant.

What sparked the blaze remains under investigation, he said.

Authorities say 585 homes were known to be destroyed, and the number was expected to increase. Another 9,000 structures remained threatened.

The Lake County fire and another blaze about 120 miles (193 kilometers) to the southeast have displaced 23,000 people and were the worst of a dozen wildfires burning in the state. The Lake County fire spread into northern Napa County, but the region’s famous wine valley was not threatened.

Rancher Lisa Comstock said she and her three dogs survived the raging fire in rural Middletown by jumping into a water trough as flames neared her home.

Comstock was also able to keep her horses nearby as the fire burned around them.

“The flames were coming over that mountain and surrounding this place like there was no tomorrow,” she said. “I jumped in the water trough with all the dogs, and the horses came up around. Thank God they just stayed here.”

At one point, she was sure she wasn’t going to make it, but talking to her animals helped keep her and the animals calm.

“If this is how I go, I’m not leaving these animals. That’s all I could think of,” she said.

Thousands of utility crew members and firefighters were working diligently to control the blaze and get life back to normal for as many people as possible, said California Department of Forestry and Fire Protection spokesman Dave Shaw.

The utility companies were trying to restore power to the area and water was flowing in some areas of town.

One person has been confirmed dead, and others were unaccounted for, but authorities said they could be staying with relatives, on vacation or elsewhere and not impacted by the fire.

The dead woman has been identified as Barbara McWilliams, 72. She told her caretaker she didn’t want to leave her home near Middletown. The world traveler and sharp-minded woman with advanced multiple sclerosis said she would be fine.

Her body was found Sunday in her burned-out home after flames kept Lake County sheriff’s officials from reaching her.

Scores of people in Lake County were escorted back to their homes Tuesday to check on pets and farm animals. They were allowed to remain for 15 minutes to feed and give water to the animals.

Lake County has been particularly hard-hit. In late July, a wildfire east of Clear Lake destroyed 43 homes as it spread across more than 100 square miles (260 square kilometers). Another fire erupted Aug. 9 several miles from the community of Lower Lake.

East of Fresno, California’s largest wildfire had moved away from the Sierra Nevada’s Giant Sequoia trees, some of which are 3,000 years old.

Read Next
On-air shooting survivor makes 1st public comments
EDITORS' PICK
Look Through: The fate of impounded stray dogs
House energy committee chair Arroyo bats for cheap electricity
What to watch out for when selecting a video surveillance solution
23,000 cops to be deployed nationwide for school reopening
Unleash the photographer in you this World Photography Day with vivo smartphones
DOH says COVID-19 cases plateauing, but public shouldn’t be ‘complacent’
MOST READ
Sharon Cuneta asks for prayers for friend in ICU who suffered silent stroke
Light therapy could be the answer to your sleep problems
Korina Sanchez reunites with former ABS-CBN co-anchors Julius Babao, Cheryl Cosim
PBA: San Miguel ousts Meralco to arrange finals duel vs TNT
Don't miss out on the latest news and information.