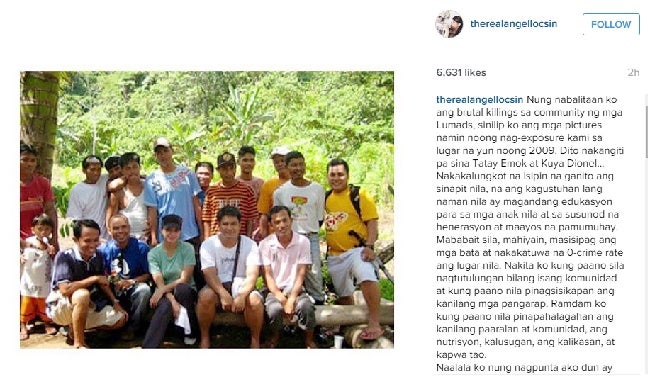 DAVAO CITY, Philippines – Actress Angel Locsin has joined calls to protect the lumad communities or the indigenous people in Surigao del Sur from harassment and killings.

In 2009, Locsin spent two days of “integration” in a community in Diatagon in Lianga, Surigao del Sur.

More than 3,000 people have fled their homes in Lianga, Marihatag, San Agustin, San Miguel and Tago, and are now staying at a sports complex in Tandag City after the violent rampage reportedly committed by the paramilitary Magahat-Baani. Most of the displaced lumad came from the village of Diatagon after the Magahat-Bagani killed Emerito “Emok” Samarca, executive director of the Alternative Learning Center for Agricultural and Livelihood Development (Alcadev), a privately operated but government-regulated learning institution that has been providing secondary and technical education to lumad children.

Locsin spent two days in Alcadev in Sitio Han-ayan in Diatagon. She slept in a room where Samarca was found dead, his hands and feet tied and his throat slit.

“When I learned about the brutal killings in the community of the lumad, I looked at the photos of my exposure in that place in 2009. Tatay Emok at Kuya Dionel were smiling in the photo,” she said.

“It saddens me to think about what happened to them. They only wanted good education and better life for the children and for the coming generation,” Locsin said in an email to the Philippine Daily Inquirer.

“I witnessed how they help each other as a community, how they strive hard for their dreams,” she added.

“I felt how they give importance to the school and the community,” Locsin said.

The actress said she could not imagine the difficulty faced by the lumad caused by the alleged militarization in the area.

She said when she was on her way to Sitio Han-ayan, she had to hide inside the pick-up truck as they passed by several military checkpoints even if she was accompanied by the town mayor.

“We learned that even residents there have difficulties entering their communities,” she said.

“Do they still have to ask permission for them to enter their ancestral domain? Why is there paramilitary?” she asked.

Locsin opposed the presence of security forces inside the schools and shared her thoughts on the risks that it has posed to the children.

“If the school is considered a sanctuary, why then are there military men where children can be caught in the crossfire?” she added.

Locsin then called on the military to stay away from schools.  She said justice must be served swiftly for the victims.  “I am one with the call that the lumad’s culture and rights have to be respected. And I believe that schools are centers for education, a sanctuary. That the military should not be there,” she said.

“I also call for justice for those killed,” she added.

Locsin said that on her last night in Alcadev, she promised the children and the community members that she would share her experience to other people.

“Please help me spread their stories to more people,” she appealed.