Escudero to Binay: It was he who turned 'blind eye' to allegations | Inquirer News
Close
menu
search

Escudero to Binay: It was he who turned ‘blind eye’ to allegations 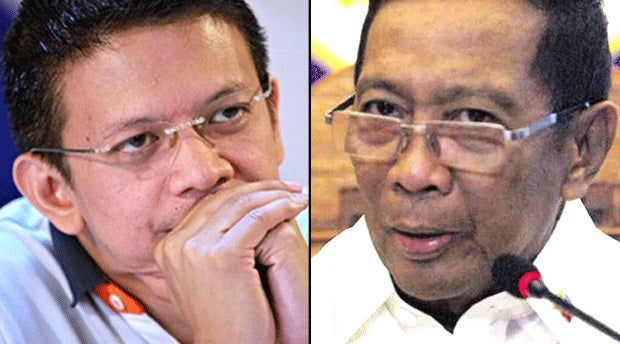 It was Vice President Jejomar Binay, who turned a “blind eye” to all corruption allegations being hurled at him, Senator Francis “Chiz’ Escudero said on Tuesday.

Escudero was reacting to an earlier statement of Binay’s spokesman, Atty. Rico Quicho, who slammed the senator for supposedly saying that other presidential aspirants have evaded answering allegations hurled against them.

Quicho said the senator was turning a blind eye to the way his colleagues in the Senate was treating the Vice President during the blue ribbon subcommittee’s hearings on corruption allegations against the Binays.

But contrary to Quicho’s claim, Escudero said it was the Vice President, who turned a blind eye to all accusations against him, noting the number of times the Senate invited Binay to attend the hearings with the latter choosing to ignore the proceeding.

“He (Quicho) cannot claim that their camp was not given the chance to be cross-examined. They were given all the opportunities to give their side of the story in the Senate. But what did the Vice President’s camp do? They chose not to participate,” said the senator.

“It was the Vice President who turned a blind eye to all these allegations. Not once did the public—who deserves to know the truth—hear him rebut point by point these charges of corruption. Not in the Senate, not in any forum that he had attended.”

“A true leader respects the institution. A true leader faces his accusers because he has nothing to hide. And that’s what exactly Senator Grace [Poe] showed when she attended the SET proceedings and faced her accuser,” he further said.

The senator also denied making a particular reference to the Vice President when he praised Senator Grace Poe for attending the proceedings at the Senate Electoral Tribunal (SET) and facing her accuser. Such display of bravery by Poe, he said, was a true mark of a leader.

(I was not referring to anyone in particular in my statement. Whoever feels hurt by what was said would be the first to react.)

Escudero then blasted Binay’s spokesman for disrespecting the Senate and calling it a “kangaroo court.”

“He forgets that the daughter of the Vice President, Senator Nancy Binay, is a member of the Senate which he is calling a kangaroo court. His lack of civility and respect for the Senate as an institution is appalling and unbecoming of a lawyer,” he further said. Maila Ager, INQUIRER.net