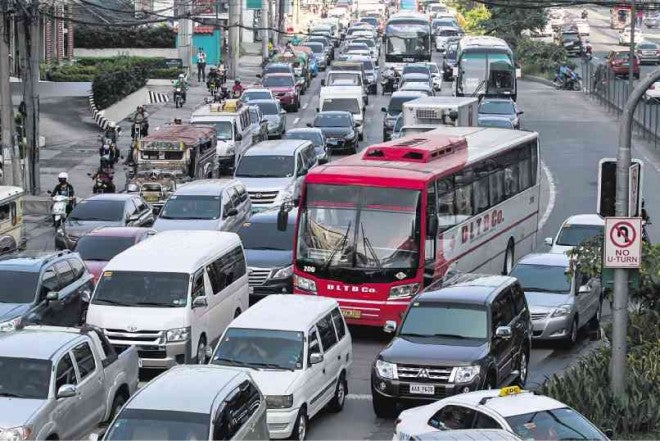 TO reduce traffic on Edsa, the Department of Transportation and Communications (DOTC) is proposing that buses should take the inner lanes so they could not just stop anywhere, and private vehicles would take the outer lanes, DOTC Secretary Joseph Abaya told a Senate hearing on Monday.

At present, buses are using the outer lanes while private vehicles are taking the inner lanes.

But during the continuation of the joint hearing of the committees on economic affairs and public works, Abaya pushed for a more efficient mode of transportation that would benefit the majority of people.

“So definitely a bus is much more efficient than a vehicle, thus pushing more buses efficiently in a behaved controlled, manner is the right way to go. It serves the carless in society; it’s a more inclusive approach to transportation,” said Abaya.

“Of course us, who own vehicles will not readily agree; we’d be noisy and complain but again the right thing to do is push more vehicles to address less privilege in society and to move more people more efficiently along our roads,” he added.

Senator Bam Aquino then asked if the bus rapid transit (BRT) system that the DOTC has been proposing would replace the current city buses on Edsa, Abaya said: “Essentially your, honor, it’s a bus on a segregated lane.”

“What we plan to do is take them to the center. They will be in the center lanes because we see there’s more discipline control on passengers; you can’t just stop anywhere; the stations will be in central island, then we’ll just create a pedestrian walkway…In that way, it doesn’t come in conflict with right turning vehicles into smaller roads…It’s really more efficient,” he said.

“So babaligtad s’ya? Yung mga buses ngayon na nasa periphery will be in the middle and the private cars which are now inside will be on the other side eventually?” asked Aquino.

But Abaya said the plan has yet to get the approval of the National Economic Development Authority (NEDA) Board and if approved, it would still take about two years to build the infrastructures needed to implement the new system.

Metro Manila Development Authority (MMDA) chief Francis Tolentino insisted during the hearing that the traffic problem was because of the growing number of vehicles on the road.

“Ang sinasabi ko po, Mr. Chair, the problem really is the volume and congestion. We really need to fast-track our infrastructures,” Tolentino added.

Responding to Senator Joseph Victor Ejercito’s queries, Rommel Gutierrez, president of the Chamber of Automotive Manufacturers of the Philippines, told the committees that the number of vehicles being sold a month is on the average of 23,000 to 25,000.