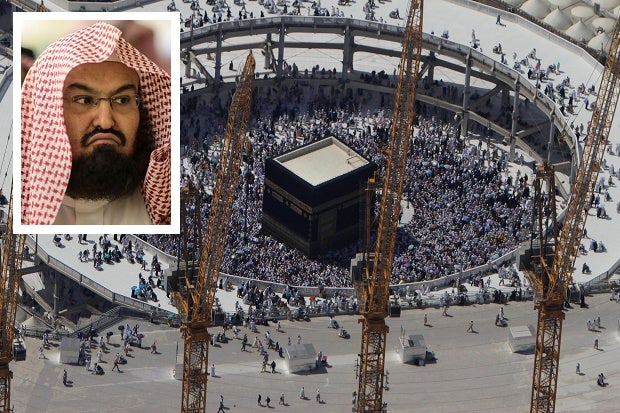 In this October 16, 2013 file photo, cranes rise at the site of an expansion to the Grand Mosque as Muslim pilgrims circle counterclockwise around the Kaaba at the Grand Mosque in Mecca, Saudi Arabia. A towering construction crane toppled over on September 11, 2015, during a violent rainstorm in the Saudi city of Mecca, Islams holiest site, crashing into the Grand Mosque and killing 111 people ahead of the start of the annual hajj pilgrimage later this month. Abdul Rahman Al Sudais (inset), Imam of the Grand Mosque, visits Al-Noor specialist hospital, where victims of the crane accident are treated. AP

MECCA, Saudi Arabia — Jumaa Ibrahim and his wife Hasnaa Karam, a Syrian couple in their early 60s, arrived in Mecca on Friday, and headed straight to Islam’s holiest site, the cube-shaped Kaaba.

It had begun to rain in the ancient desert city. Karam, who had waited a lifetime to make the pilgrimage to stand before the Kaaba, stood with her palms facing toward the sky in prayer. Ibrahim stood a few feet to her side, quietly reading verses from the Quran.

Suddenly, a loud boom echoed. Karam found herself surrounded by carnage — body parts were scattered everywhere amid pools of blood on the white marble floor of the mosque.

The kingdom’s Civil Defense says unusually strong winds tipped over one of the massive cranes around the Grand Mosque that houses the Kaaba. The crane crashed through part of the mosque’s roof and upper floors, sending concrete slabs crashing down.

She escaped injury, but her husband was among the hundreds injured, his leg broken in two parts. The death toll reached 111 on Sunday as more of the injured died. The Health Ministry on Sunday said 394 people were treated at medical facilities after the crane collapse, and 158 of the injured remain hospitalized.

Ayman Shaaban, the owner of a hajj tour company in Egypt, was praying on the ground floor of the Grand Mosque when the crane collapsed. He says he was tossed some 20 meters (66 feet). He was immediately rushed into a large room with other injured people, the right side of his face broken, bloodied and swollen, unable to open his left eye.

Saudi media reported that a committee has been established to investigate the incident. It is unclear how the kingdom’s Civil Defense, which led rescue operations, was able to determine that winds caused the crane’s collapse. The spokesman for Civil Defense could not be immediately reached for comment.

Shaaban has questions about the cause of the accident.

“Logically speaking, for a crane to fall from wind, even if there were strong winds, something doesn’t add up,” Shaaban said from his hospital bed. “If there is negligence, because of these souls lost, someone must be held accountable.”

Such concerns indicate the sensitivity of the incident for Saudi King Salman, whose title is Custodian of the Two Holy Mosques — the Grand Mosque in Mecca and the first mosque built by the Prophet Muhammad in Medina. The king visited the Grand Mosque on Saturday and later met with some of the injured being treated at the government-run Al-Noor hospital.

The Al Saud royal family’s legitimacy is rooted in part in its claim to be the protectors of Islam’s two most sacred sites that are at the center of the hajj — the pilgrimage that all Muslims are required to perform at least once in their lifetime if they are able to do so.

The accident comes just over a week before this year’s hajj, which is expected to start around Sept. 21 and last four to five days. It will draw between 2 to 3 million Muslims from around the world for a series of rites in Mecca and surrounding areas that are believed to trace the footsteps of the prophets Ibrahim and Ismail, or Abraham and Ishmael as they are named in the Bible.

Officials have not yet removed the crane. An Associated Press journalist saw the German-made Liebherr crane on Sunday, its base tipped forward and its superstructure leaning into the mosque where it struck.

Over the years, the Grand Mosque has undergone several expansions to accommodate the growing numbers of pilgrims, but in the last decade, the kingdom launched its most ambitious overhaul ever.

Historic sites significant for Islam have been demolished to make way for hotels, causing an outcry among some Muslims. Saudi officials say the overhaul is needed as the number of pilgrims during hajj is projected to reach 7 million by 2040.

The current $60-billion Grand Mosque expansion will almost double the area for pilgrims to pray at the Kaaba. The Grand Mosque is now surrounded by dozens of cranes, part of the massive construction effort headed by the Saudi Binladin Group. The Binladin family has been close to Saudi Arabia’s ruling family for decades and runs major building projects around the country. Al-Qaida’s late leader Osama bin Laden was a renegade son disowned by the family in the 1990s.

The Binladin Group has not released any statements to the press about the crane collapse and its representatives have not been made available for comment. The company’s chairman or a top representative is likely a member of the investigating committee, according to several Saudis familiar with the process.

On Sunday, the imam of the Grand Mosque, Sheikh Abdul Rahman Al Sudais, also visited the injured. Flanked by a team of assistants, he gave patients bags that included a copy of the Quran, a vial of traditional Arab fragrance called oud, and bottles of water from the sacred underground Zamzam well in Mecca believed to have healing properties.

He told patients that that there was great reward for them in being at the Kaaba, just before the hajj.

“This is God’s will,” he told each patient as he passed by their bed. “The Custodian of the Two Holy Mosques, may God protect him, is very concerned with your well-being.”

Dr. Salem Bajuifer, medical director at Al-Noor,, said his team received around 120 patients, many of them with serious injuries requiring amputations.

The injured at the hospital come from a range of countries, including Germany, Canada, Turkey, Egypt, Indonesia, Pakistan, Syria and Iran.

The Indian mission in Saudi Arabia says two of its citizens were killed. The Saudi government has not released details about the nationalities or ages of the dead since many are still being identified. Several children are believed to have died.

“It is a big trauma,” Bajuifer said when asked about the emotional toll on patients and their relatives. “Of course everybody is traumatized, not only the patients. Even we are traumatized.”

Karam, whose husband has been in and out of surgery for his leg, says she’s too traumatized to think about what comes next. She fled barrel bombs and the civil war in Syria to live in Turkey, never expecting to be so close to death at Islam’s most sacred site.

“I am still feeling terrified,” she said, as she broke into tears.