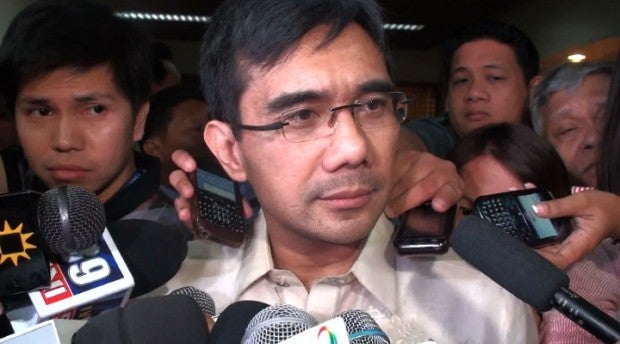 ILOILO CITY—Social Welfare Secretary Corazon “Dinky” Soliman has complained to the administration party about the alleged interference of Iloilo Rep. Niel Tupas Jr. in the distribution of cash for shelter assistance to survivors of Supertyphoon “Yolanda” (international name: Haiyan).

“I have raised it to the Liberal Party because they [lawmakers] are not needed there and they shouldn’t be there. We raised this so that (the party) will discuss this and advise the congressman (Tupas),” Soliman told reporters in Iloilo.

Reached by the Inquirer for comment, Tupas gave his reaction but asked that it not be printed because he wanted to speak first with Soliman. Later, in a text message to an Inquirer reporter in Manila, he lashed out at the secretary, calling her complaint “improper and uncalled for,” though he had yet to read it.

“I’m surprised by that statement coming from the secretary,” Tupas said in the text message.

Soliman was reacting to reports and complaints that Tupas, a close ally of President Aquino and chair of the House committee on justice, was present during the distribution of the Emergency Shelter Assistance (ESA) grants in towns under Iloilo’s fifth congressional district, which he represents.

The towns, which include Barotac Viejo, Ajuy, Sara, Lemery, San Rafael, Concepcion, Batad, Balasan, Carles, San Dionisio and Estancia, are among the areas devastated by the monster typhoon that struck mostly the Visayas on Nov. 8, 2013.

ESA consists of cash grants to the survivors, which includes P30,000 for each family whose houses were destroyed and P10,000 per family for those with damaged dwellings.

The grants are downloaded to local government units and are distributed by local officials, municipal social workers and staff of the Department of Social Welfare and Development (DSWD).

Soliman said government officials, except the incumbent elected local officials from mayor to lower positions, had no business being present at and participating in the distribution of the ESA. “We cannot tell them not to go there, but ethics and function-wise, they don’t have to be there,” she said.

Soliman said she specifically raised the issue about Tupas because he was the subject of complaints.

In his text message, Tupas said his interference in the ESA distribution in his district resulted from complaints from his constituents. “I receive thousands of individual complaints from my constituents regarding anomalies and incompetence by the DSWD and other agencies in the implementation of the fund,” he said.

“As the representative of the district and member of Congress that allocated the fund, I cannot just turn a blind eye to these complaints,” Tupas said.

He said it was his duty to make sure and monitor that the funds reach the intended beneficiaries.

Iloilo Vice Gov. Raul Tupas earlier complained that he was sidelined in the distribution of ESA in Concepcion town because the congressman, his elder brother, did not want him to be there. He has accused the lawmaker of using the ESA for political purposes.

The brothers have been at odds over who will replace the congressman, who is serving his third and final term. Niel Jr. has publicly declared that his successor will be his wife and chief of staff, Angeli Lee-Tupas. But the vice governor has also announced his plan to run for that position.

The Tupas family is one of the province’s dominant political clans. Its bailiwick is Barotac Viejo, their hometown.

Niel Jr., the eldest of seven siblings, also served as provincial board member from 2004 to 2007, representing the fifth district. His father, Niel Sr., served for three terms as governor.

Another younger brother, Niel III, is mayor of Barotac Viejo where Parly Balleza, Niel Jr.’s brother-in-law, is a councilor. The youngest, Nielex, is serving his third term as Iloilo City councilor, while another brother, Nielo, is a provincial board member.—With a report from DJ Yap

The importance of being Niel Tupas