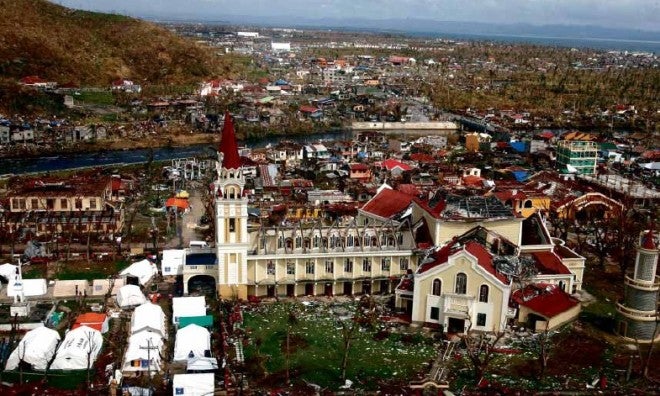 AFTER THE STORM Palo, Leyte province, lies in ruins in the aftermath of Supertyphoon “Yolanda.” INQUIRER PHOTO

Almost two years after Supertyphoon “Yolanda” (international name: Haiyan) flattened most of central Philippines, only less than a fourth of foreign aid pledges has been received by the national government, according to Budget Secretary Florencio B. Abad.

Citing the latest, updated data from the Foreign Aid Transparency Hub, Abad said that of the P73.3 billion, or $1.6 billion, in pledges made by international aid agencies and foreign governments, only P17.3 billion, or $386.2 million, was received by the national government, nongovernment organizations (NGOs) and multilateral institutions.

Abad pointed out that of the total foreign aid received this far, the bulk, or P14.8 billion, had been distributed to NGOs and multilateral agencies, such as the United Nations.

“The No. 1 problem is that a significant portion [of the foreign aid commitments] has remained as pledges, and those that may have materialized have not been released directly to the Philippine government, especially for UN agencies,” he told reporters on the sidelines of last week’s Asia-Pacific Economic Cooperation meetings in Cebu.

“And the coordination [with NGOs and multilateral agencies] has not been good. We have not been able to get updates from them how they may have disbursed [the aid they received] and quite a number have been donations in kind,” he added.

Abad said that the NGOs and multilateral institutions should also explain, not just the government. “People are barking up the wrong tree if the government should explain everything. We can explain only up to the extent of P1.2-billion cash and P1.3-billion noncash [that the government had received].”

“Where are all those pledges [to NGOs and multilateral agencies]?” he asked, noting that their representatives had “complete” photo opportunities when they came.

Had they invested their funds in repairing municipal buildings so that offices could get back to work, that would have been a wiser move than build boats and get all the media attention, Abad said.

Chaloka Beyani, the UN special rapporteur on the human rights of internally displaced persons (IDPs), who visited storm-hit areas in July, said “financial constraints on authorities have impacted on their ability to move forward toward durable solutions for all those affected and to resolve immediate issues related to adequate provision of basic services.”

He commended the government’s immediate responses but added it had failed to ensure adequate sustainable solutions for the IDPs. He raised concerns over funding shortfalls and political challenges, including inadequate cooperation between national and local governments, which are delaying processes toward achieving “durable” solutions in the communities.

Abad said the government had released P89 billion as of mid-July out of the required P185 billion for reconstruction and rehabilitation. “Insofar as budget requirements, we are complete up to 2016 … we are already covered. The real challenge here is execution,” he said.—Ben O. de Vera