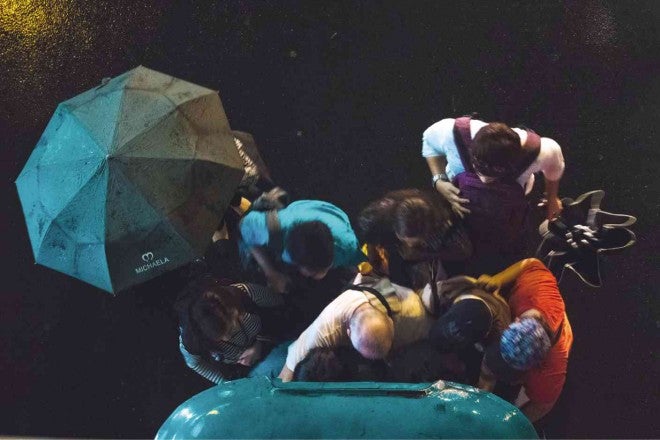 JEEPNEY JOSTLE Public utility vehicles are in short supply as usual during the rainy night of Sept. 10, as shown by commuters vying for rush-hour rides in Makati City. JILSON SECKLER TIU

TRAVEL time on Edsa has been reduced by 10 to 15 minutes.

So claimed the police officer recently put in charge of traffic management on the country’s busiest highway, as he and other officials spent much of Friday finding more ways to ease the daily nightmare endured by motorists and commuters on the 24-kilometer thoroughfare.

“Two out of 10,” Chief Supt. Arnold Gunnacao said when asked by reporters to assess the five-day performance of his men in the Philippine National Police-Highway Patrol Group (PNP-HPG), which took over as traffic marshals on Edsa on Sept. 7.

“As a whole, (travel time) was reduced,’’ said Gunaccao, the PNP-HPG director. The usual one-hour trip from Monumento to Quezon Avenue, for example, may now take only 45 minutes, he added.

Gunnacao was at the Metropolitan Manila Development Authority (MMDA) headquarters in Makati City for an interagency meeting on the Edsa traffic situation. The meeting—which began at 1:30 p.m. and was still going on at press time—was also attended by Cabinet Secretary Jose Rene Almendras, Land Transportation Franchising and Regulatory Board executive director Robert Cabrera. MMDA chair Francis Tolentino joined them at 5:10 p.m.

The police official considered the 10-15 minute reduction an “improvement” and a sign of “progress.”

“The President said that with all those recommendations, he wants immediate results. Within a week, we got results. We reduced travel time,” he said. “We can still improve.”

Among the new measures discussed in the meeting were “engineering” adjustments on Edsa that were aimed at preventing bottlenecks at some U-turn slots.

“There will be closure of some slots, particularly the one in front of Trinoma mall (in Quezon City) that crisscrosses from West Avenue to the mall. So the U-turn slot that will be used is the one near Landmark,” Gunnacao said.

The bus stop in the Kamuning area which motorists encounter as they go down the flyover on the Kamuning service road will be moved closer to Q-Mart. At present, the buses making a stop there leave only one lane open for other vehicles, causing a “gitgitan” (congestion), he noted.

Starting Monday, the HPG will be stricter and will flag down private vehicles that will use lanes designated for buses, and vice versa, Gunnacao said.

The MMDA has committed 250 traffic constables for deployment along Edsa while the HPG—which was initially tasked to focus on six “chokepoints”—now has 150 members manning the entire highway, he added.

HPG personnel were also beefed up by around 20 PNP Special Action Force (SAF) troopers on Friday, after the latter completed training in traffic management. “(SAF members) are deployed at two per intersection,” Gunnacao said.