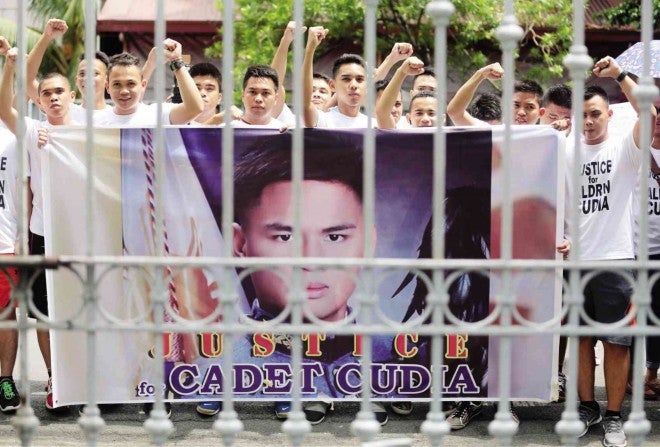 Invoking the magistrates’ compassion, dismissed Philippine Military Academy (PMA) Cadet First Class Aldrin Jeff Cudia and his family on Thursday asked the Supreme Court to order his former school to release his records so that he could pursue a law degree.

In a 15-page petition filed through Public Attorney’s Office chief Persida Acosta, the Cudia family asked the high court to issue a mandamus “commanding” the PMA to release his academic documents so that he could enroll at the University of the Philippines (UP) College of Law.

Cudia earlier passed the tough UP Law Aptitude Exam although he has yet to enroll because the PMA refused to release his school records.

Her emotional plea for Cudia exhausted Acosta that she fainted during a press conference on Thursday. She recovered minutes later, saying in an interview that she was just very tired.

In his petition, Cudia asked the court to intervene for the release of his college diploma, a certification of his general weighted average, a certificate of good moral character and honorable dismissal, a certificate of discharge for purposes of enrolment/transfer to another school, and his transcript of records.

“In the higher interest of justice, and on equitable and humanitarian considerations, this honorable court may compel the PMA to award Cadet Cudia with his diploma, a clean transcript of records and a Bachelor of Science degree, as well as other documents which may facilitate his transfer to an institution of higher learning,” he said in his petition.

He cited the high tribunal’s decision last month to release Sen. Juan Ponce Enrile on humanitarian grounds even though plunder is a nonbailable charge.

“It has shown that justice may be dispensed without sacrificing our humanity; that in settling controversies, the interests of an individual is as equally paramount as that of the State,” Cudia said.

The Cudia family also cited the ill health of the former cadet’s father, Renato, who has become wheelchair-bound after a stroke.

“With Cadet Cudia’s mother unemployed and his father seriously ailing, Cadet Cudia’s re-enrollment for tertiary education would be too difficult for the indigent Cudia family to bear,” they said.

In April, the Supreme Court junked with finality Cudia’s petition against the PMA’s decision to kick him out of the military school. Cudia, supposed to be among the topnotchers of the school’s “Siklab Diwa” Class of 2014, was dismissed for lying about being late to class by two minutes.