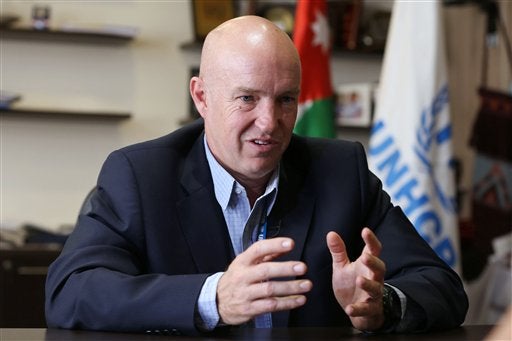 In this Wednesday, Sept. 9, 2015, photo, the head of the U.N. refugee agency in Jordan, Andrew Harper, speaks during an interview with The Associated Press in Amman, Jordan. AP

AMMAN, Jordan— The influx of refugees to Europe was triggered in part by donors taking the “cheap option” and not giving enough aid to displaced Syrians in Middle Eastern asylum countries, the head of the U.N. refugee agency in Jordan said in an interview.

Andrew Harper also called on Jordan to speed up security vetting for Syrian refugees, who must wait for weeks in a remote desert area during the process. “It’s not a place where anyone should have to be,” he told The Associated Press on Wednesday.

Harper’s comments reflected the growing frustration of those aiding more than 4 million Syrian refugees in host countries such as Jordan and Lebanon. Severely underfunded aid groups have had to slash food and cash support in recent months, leading to growing desperation.

Harper said refugees feel betrayed by the international community and the aid agencies. This, he said, “is a reason why we are seeing movement back into Syria, and in many cases, movements continue on into Europe and further afield.”

“The smartest move would have been for Europe and the Gulf states and everyone to provide more support to countries like Jordan and Lebanon two or three years ago when we were asking for it,” he said.

“(The donors) sought the cheap option which was to provide us with peanuts in order to deal with the worst humanitarian situation for decades,” he added.

The UN refugee agency has a funding shortfall of 50 percent, or $500 million, for the Syria crisis this year, he said.
Harper said resettlement in Europe will only make a small dent and the international community must do more to help the millions who remain in the Middle Eastern asylum countries and displaced inside Syria.

“It just makes sense, for no other reason than that it is more cost-effective to address humanitarian needs in countries of asylum, such as Jordan and Lebanon, than it is to deal with them once they get to Europe,” he said.

The agency chief said he believes migration from regional hotspots — Iraq, Yemen and Libya in addition to Syria — will only increase.

“No one in the world is going to be isolated (from) this,” he said. “When you’ve got millions of people who have been bombed, who have been impoverished and who have got no future, they will move to all corners of the world.”

The European Union is imploring member countries to better share the burden of refugees flooding the continent, but the numbers being discussed are small compared with the half-million who have already arrived and hundreds of thousands more on their way.

Many refugees hope to settle in wealthy nations like Germany and Sweden and the EU is struggling find a more equitable solution that would also send a fair share of refugees to less-desirable and less-welcoming places such as Slovakia and the Baltics.

Meanwhile, Harper noted that Jordan has increased restrictions for Syrians wanting to enter Jordan and called on authorities to speed up the entry process.

Jordan hosts about 630,000 Syrian refugees, who now make up about 10 percent of the country’s population.

Jordan’s formal crossings with Syria are closed and it funnels refugees through informal passages in an eastern desert area. They are kept waiting, often for weeks, near a berm in a remote area just inside Jordan, and only several dozen per day are permitted to move deeper into the kingdom after security checks.

Harper said that while Jordan has legitimate security concerns about extremists, it should expedite the screening and move it from the desert to recognized refugee camps.

There are “hundreds, if not more, women, children, elderly and sick we need to prioritize,” he said, adding that those waiting lack proper shelter or sanitation.

Brig. Gen. Saber al-Mahayreh, the commander of Jordan’s Border Guard, said the military is allowing refugees to enter according to a set of priorities.

“They come in every day and we let them enter. Maybe we can’t let all of them come in at one time,” he told reporters in a briefing at his headquarters Thursday. He did not respond to questions about hundreds being forced to wait in the desert.

Harper also called on Jordan to consider issuing work permits for 50,000 to 100,000 Syrian refugees so they can be less dependent on aid.

Jordan has restricted labor rights for refugees, fearing a rise in high domestic unemployment. Harper noted that tens of thousands of Syrians already work illegally. The refugees, many of them skilled, are willing to do manual labor that is traditionally shunned by Jordanians and currently performed by migrant workers. TVJ