Pics, tweets and streaming video for pope’s US visit 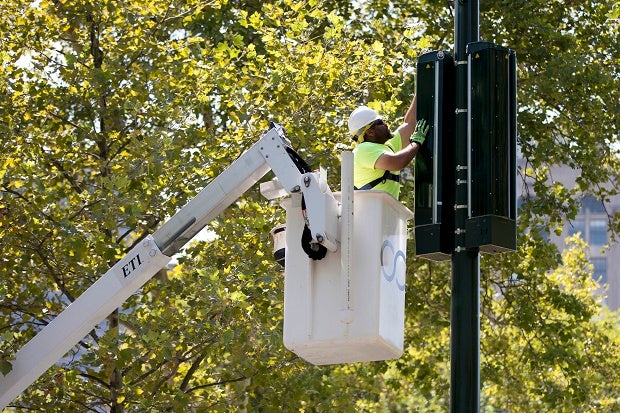 Technician Kevin Wallace with Crown Castle works on a mobile phone communication equipment Wednesday, Aug. 26, 2015, along the Benjamin Franklin Parkway in Philadelphia. On the parkway Pope Francis is scheduled to visit The World Meeting of Families’ festival and celebrate a Mass during his visit to the United States. AP

PHILADELPHIA — Pope Francis isn’t your typical social media star. He doesn’t even carry a cellphone. But wherever the 77-year-old pontiff goes, millions of tweets, posts, pictures and video streams are sure to follow.

Two weeks after spurring a viral frenzy with a trip to a Rome eyeglass shop to get new lenses, the wildly popular Francis is embarking on his first journey to the greatest fishbowl of all: America.

Social media platforms and wireless carriers anticipate activity related to his Sept. 22-27 visit to rival the Super Bowl — there’s even a ban on drones and selfie sticks.

Wireless carriers are using the big game as a guide as they add capacity near the pope’s stops in Washington, New York and Philadelphia.

Before that, Francis will meet with President Barack Obama and address Congress. He’ll also address the UN General Assembly and visit the Sept. 11 memorial in New York.

Bishops are getting crash courses on tweeting and live streaming, and organizers are pushing the official papal hashtags: #PopeInUS and, for Spanish speakers, #ElPapaEnUSA.

For people attending Francis’ US events, social media can take on the role of a scrapbook, with personal snapshots and snippets of video preserving their place amid history — a papal answer to the phrase “pics or it didn’t happen.”

And, if recent papal travel is a guide, millions more will be watching from afar, looking for real-time insights from on-the-ground reporters and Vatican insiders along with unexpected turns, like when Francis slipped into a Bolivian Burger King this summer for a wardrobe change.

“You can either be watching in person and sharing that experience with people near and far, or you can be far away and watching that event through Twitter,” said the platform’s Bridget Coyne, who manages government and media teams. “You can experience the event without being there, and it can also be the memory of that event.”

Francis has been a social media sensation since his 2013 election. That year, he eclipsed the royal baby, Prince George, and the Harlem Shake as the most talked-about topic on Facebook.

His first international trip, to Brazil in July 2013, generated more than 1.3 million tweets and 36 million retweets. His January trip to the Philippines nearly crashed Twitter’s servers.

That’s a far cry from the social media landscape the last time a pope visited the US — Benedict XVI, in 2008.

Twitter had just 5 million users, about 1.5 percent of its current total, and the pope’s official account — @pontifex — was four years away from making its debut.

Francis has fast become one of the most-followed celebrities on Twitter. His accounts, in nine languages including Arabic and Latin, have surged from 3.4 million followers around the time of his election to 22.7 million — more than Nicki Minaj or Miley Cyrus.

To hone its social media strategy, the Pontifical Council for Social Communications turned to a team of experts: interns from Villanova University, near Philadelphia.

They critique the Vatican’s existing social media accounts, parse out what works and offer up their own ideas. A recent hit: getting the pope involved in Throwback Thursday, the phenomenon where people and institutions send out older photos to give users historical perspective or another look at a past event.

“Francis is a very popular pope. People go crazy over anything with him,” Villanova senior Melissa Connolly said. “People love to see him out and about. People love to hear from him.”