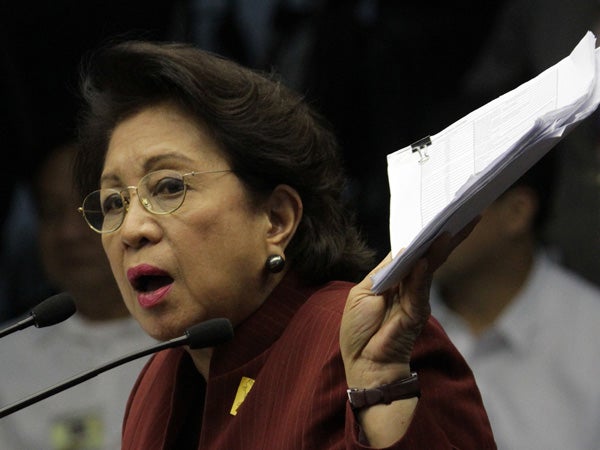 Ombudsman Conchita Carpio-Morales gestures in this undated file photo. The Ombudsman has indicted former PCGG officials for an amicable settlement which was allegedly grossly disadvantageous to the government. INQUIRER FILE PHOTO

Ombudsman Conchita Carpio-Morales has indicted former officials of the Presidential Commission on Good Government (PCGG), led by former chair Magtanggol Gunigundo, for approving a compromise agreement which was a “virtual sell-out” and “patently unfair” to the government.

The Ombudsman said Gunigundo, together with other former PCGG commissioners Reynaldo Guiao, Hermilo Rosal, Julieta Bertuben, Herminio Mendoza and former director Mauro Estrada, violated Section 3 of Republic Act No. 3019 or Anti-Graft and Corrupt Practices Act, which “prohibits the act of entering, on behalf of the government, into any contract or transaction manifestly and grossly disadvantageous to the same, whether or not the public officer profited or will profit thereby.”

The case rooted from a petition for forfeiture of ill-gotten wealth filed by former Maximino Argana in July 1987 over a disputed 481.78-hectare land in Famy and Pangil in Laguna.

The Ombudsman said Argana’s heirs offered a compromise agreement wherein the government would get 361.92 hectares or 75 percent of the total land area, while the heirs would receive the remaining 25 percent (199.86 hectares).

The Sandiganbayan approved the agreement in July 1998. But the following month, the PCGG and the Office of the Solicitor-General, under a new leadership, filed a Motion to Rescind Compromise Agreement and to Set Aside Judgment by Compromise for “fraud and insidious misrepresentation,” which the anti-graft court’s Third Division granted in 2000.

The Ombudsman said an investigation by its Field Investigation Office revealed that the parcel of land received by the government was valued at only P3.62 million based on the Comprehensive Agrarian Reform Program valuation of P10,000 per hectare, while the property retained by Argana’s heirs was valued at P2.45 billion based on market valuation of P2,000 per square meter.

“Due to the pronounced inequity in the distribution of properties between the government and the heirs under the agreement, the government stood to suffer substantial loss, hence, the contract was grossly and manifestly disadvantageous to the government,” the Ombudsman’s resolution stated.   Yuji Vincent Gonzales