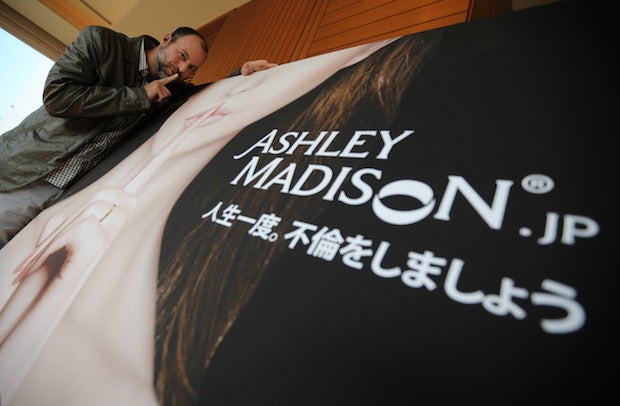 An April 1, 2014 file photo of Noel Biderman, chief executive of Avid Life Media Inc., which operates AshleyMadison.com., posing during a photo session in Tokyo. Hackers claim to have leaked a massive database of users from Ashley Madison, a matchmaking website for cheating spouses. AP

CHICAGO, United States — A US pastor committed suicide six days after his name was exposed by hackers of the Ashley Madison adultery website, his wife told CNN Wednesday.

Canadian police have said that at least two suicides were linked to the leak of 32 million customer profiles from the Canada-based site last month. It’s not clear if John Gibson’s death was one of them as police released no details.

Christi Gibson discovered her husband’s body — and a suicide note which chronicled his demons and his shame at being exposed — in their New Orleans home on August 24.

“He talked about depression. He talked about having his name on there, and he said he was just very, very sorry,” Gibson said as their adult son and daughter sat next to her in a New Orleans studio.

In addition to his work as a pastor, Gibson, 56, taught at New Orleans Baptist Theological Seminary.

Gibson said her husband, who had struggled with depression and addiction in the past, was worried that he would lose his job.

“It wasn’t so bad that we wouldn’t have forgiven it, and so many people have said that to us, but for John, it carried such a shame,” she told CNN.

“What we know about him is that he poured his life into other people, and he offered grace and mercy and forgiveness to everyone else, but somehow he couldn’t extend that to himself.”

Ashley Madison, launched in 2001, is known for its slogan: “Life is short. Have an affair.” It helps connect people seeking to have extramarital relationships and is owned by Avid Life Media.

According to authorities, the company became aware of the hack on July 12 when staff were greeted in the morning with a message on their computers threatening to leak client information unless the Ashley Madison website was “shut down immediately, permanently.”

The message was accompanied by rockers AC/DC’s song “Thunderstruck.”

Ashley Madison ran into more trouble when tech news site Gizmodo looked at the leaked data and concluded that it showed little if any activity from the site’s purported female members, suggesting many accounts were in fact fake.

Avid Life Media rejected the analysis and said the site has registered hundreds of thousands of new members — including real women — in the wake of the hack, which has garnered massive media attention.

Tributes to Gibson poured in from students and faculty who remembered him as a kind, generous man who would repair student’s vehicles in his spare time.

“John was a popular member of our Leavell College faculty,” seminary president Chuck Kelley said in an obituary posted on the school’s blog.

“He was particularly known for his acts of kindness to the seminary family. John was the quintessential good neighbor.”

His son alluded to Gibson’s troubles at an August 28 memorial service.

Students and former classmates took to the seminary’s Facebook page to mourn his loss.

“Amazing man and teacher. I do not hold anything against you, Dr. Gibson. We all have shortcomings,” wrote Robbie Combs.

“Hoping the very grace and mercy and forgiveness he taught of with such vigor will comfort his family and all who knew him,” wrote Dore Atwill Kesterson.

Gibson, whose wife Christi is also a minister, comes from a long line of Baptist ministers.

He was pastor of First Southern Baptist Church in Pearlington, Mississippi — about a 45 minute drive from his home on the seminary grounds.

He obtained a doctorate of theology from the seminary and was elected to the faculty in 1998, the obituary said. CB

Read Next
Junjun Binay: Trillanes cannot invoke immunity to escape libel case
EDITORS' PICK
In Borongan, nuns play hoops (not mahjong)
House energy committee chair Arroyo bats for cheap electricity
A laptop that maximizes your WiFi so you can maximize your productivity
Why Tagle is a leading papal contender
Powered by style, innovation and passion
KWF has no power to ban, censor written works – Lagman
MOST READ
Why Tagle is a leading papal contender
Arjo Atayde reveals proposal to Maine Mendoza was ‘more than a year’ in the making
My neighbor FVR: From soldier to president
Zubiri on SRA mess: Shameful, disgusting
Don't miss out on the latest news and information.