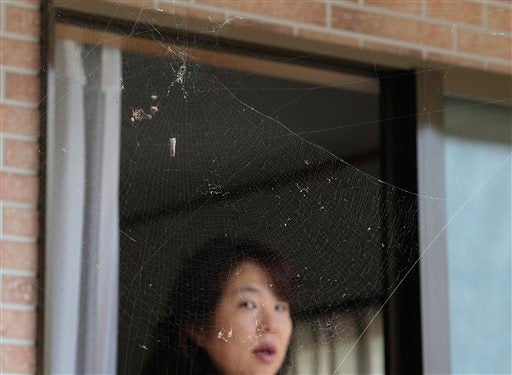 In this Friday, Sept. 4, 2015 photo, Naoko Kanai watches a spider’s web at her house after returning home for the first time in about two months, in Naraha town, Fukushima prefecture, northeastern Japan. AP

NARAHA, Japan — A few signs of life are returning to this rural town made desolate by the Fukushima nuclear disaster four-and-a-half years ago: Carpenters bang on houses, an occasional delivery truck drives by and a noodle shop has opened to serve employees who have returned to Naraha’s small town hall.

But weeds cover the now rusty train tracks, there are no sounds of children and wild boars still roam around at night. On the outskirts of town, thousands of black industrial storage bags containing radiation-contaminated soil and debris stretch out across barren fields.

This past weekend, Naraha became the first of seven towns that had been entirely evacuated to reopen since the March 11, 2011, disaster, when a tsunami slammed into the Fukushima Dai-ichi nuclear power plant, causing meltdowns and a massive radiation leak.

The town’s viability is far from certain, and its fate will be watched closely by authorities and neighboring towns to see if recovery is indeed possible in this radiation-contaminated land.

Just over a tenth of Naraha’s population of 7,400 say they plan to move back soon, and only a few hundred have actually returned, most of them senior citizens. Schools won’t reopen for another two years, and many families with children are staying away due to concerns about radiation levels, which authorities say are below the annual allowable limit. Residents are given personal dosimeters to check their own radiation levels if they want.

One thing that won’t change is the town’s dependence on the nuclear industry — only this time it will involve dismantling damaged reactors, not building and running them.

An economic revival plan centers on a giant 85 billion yen ($700 million) facility that is being built on the edge of town to research, develop and test specialized robots and other technology — part of the government’s “Innovation Coast” plan to turn the disaster-hit region into a hub for nuclear plant decommissioning technology.

The complex will include mock-ups of sections of the wrecked Fukushima reactors to train workers on robot operations. Dismantling the Dai-ichi plant and removing its melted reactor cores will take about 40 years, the government estimates.

The facility is expected to draw hundreds of workers, and the town also seeks to host laborers to decontaminate buildings and outdoor areas in the area. Naraha is also home to a second nuclear power plant — Fukushima Dai-ni — that barely survived the tsunami but may be scrapped due to local opposition to its restart. So it may also be dismantled. 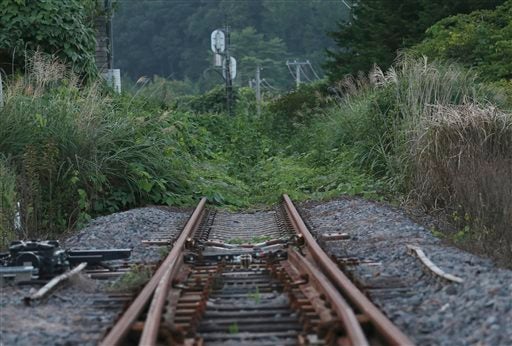 In this Friday, Sept. 4, 2015 photo, the rusty train track of Joban line is covered with weeds near the Tatsuta Station in Naraha town, Fukushima prefecture, northeastern Japan. (AP Photo/Koji Sasahara)

Returning residents are determined to make a go of it, but they wonder if the town will survive economically — and mourn that it will never be the same cozy place it was five years ago.

“There are more decontamination workers than townspeople. It’s like we’ve been taken over,” says carpenter Koichi Takeda, who evacuated to nearby Iwaki City and was in town to help a friend clean her house.

He has a number of clients renovating their houses in Naraha, but most of them are undecided about whether they will actually return. “It’s like keeping a vacation home here,” he said.

The southern edge of Naraha already hosts a soccer park called J-Village where temporary dormitories have been erected to house thousands of workers at the Dai-ichi plant. Some residents, especially women, say they feel intimidated by a growing number of male workers from outside the town, citing the recent arrest of a former decontamination worker in another town of Fukushima in a murder case. 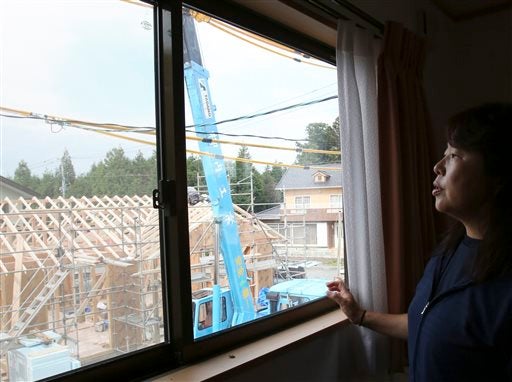 In this Friday, Sept. 4, 2015 photo, a neighbor’s new house under construction is seen through windows of Naoko Kanai’s house after returning home for the first time in about two months, in Naraha town, Fukushima prefecture, northeastern Japan. (AP Photo/Koji Sasahara)

“I’m more concerned about security in town rather than the shortage of groceries and other inconveniences,” said Yukiko Takano, 43, who runs a mobile cafe out of her van near the town hall.

Tokuo Hayakawa, a 75-year-old Buddhist monk who returned with his wife, said he isn’t very optimistic about the town’s future.

“The town’s reconstruction plan seems to be mainly for people from outside,” he said. “If I were in my 20s or 30s, I wouldn’t have returned. But at my old age I don’t have time and energy to start over elsewhere.”

Other elderly residents said they feel sad about not being able to invite grandchildren anytime soon given radiation concerns for kids.

“I was so sad to hear that my daughter said she can’t bring her child here,” said Takeo Suzuki, 63, getting teary. “She grew up here and this is her home. We built this place for her to come back when she wants to.”

Some 100,000 people from about 10 municipalities around the wrecked nuclear plant still cannot go home. Many have moved to apartments or houses elsewhere, and some live in temporary housing built by the government.

The government hopes to lift all evacuation orders except for the most contaminated areas around the plant by March, 2017, offering up to 100,000 yen ($800) per household for moving back. But evacuees criticize the plan as a public relations stunt to showcase Fukushima’s recovery ahead of the Tokyo 2020 Games. Sections of two other towns reopened last year, but only half of their populations have since returned.

Naoko Kanai, a 50-year-old homemaker, is among those wrestling with whether to return to Naraha.

Kanai, who lost her job at a manufacturing company office in town that closed after the disaster, was back Saturday to check her house for the first time in about two months. Previously, she had said she had no intention of moving back as her family has resettled in nearby Iwaki City.

But as she opened the living room curtains to let in the air, her emotions wavered. 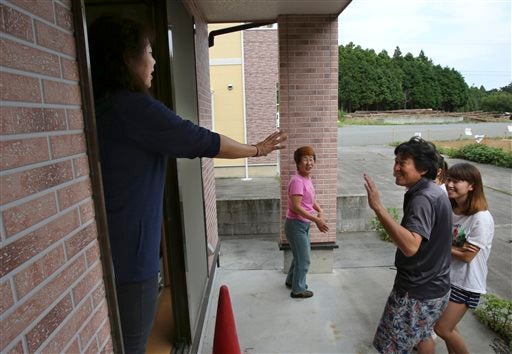 In this Friday, Sept. 4, 2015 photo, Naoko Kanai, left, waves to her neighbor Koji Matsuimoto, second from right, from her house after they returned home for the first time in about two months, in Naraha town, Fukushima prefecture, northeastern Japan. (AP Photo/Koji Sasahara)

“This is not just a house, it’s filled with memories of my family and its history,” Kanai said. “I remember how we talked about the design of this house, the color of the curtain when we first moved in. This is where I packed lunch for my boys.”

Her older son has since married and doesn’t want to come back with his baby. But her second son keeps his room almost the way it was in 2011 — his high school uniform hangs in the closet, a bookshelf filled with comic books, and a blanket folded on his bed.

“He wants to come back,” Kanai said. “I can’t abandon this place.” TVJ