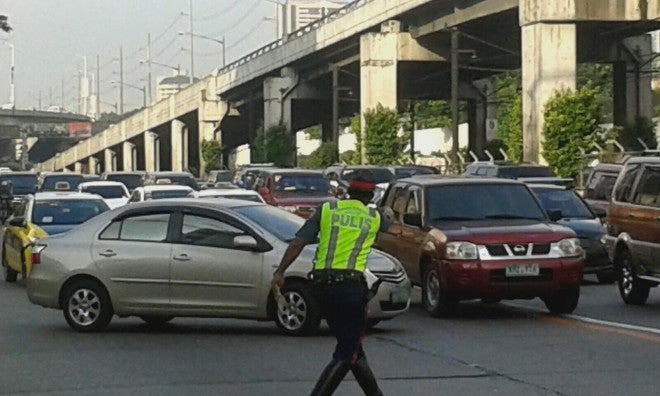 On the second day of the men of the Philippine National Police (PNP) on the Epifanio delos Santos Avenue (Edsa), the PNP saw there are still more work to do.

PNP chief Director General Ricardo Marquez said there are still more to be done to fully achieve the goal of minimizing traffic congestion on the busy 23.8-kilometer thoroughfare connecting major cities from Caloocaan to Pasay City.

Marquez and the head of the PNP Highway Patrol Group Chief Superintendent Arnold Gunnacao inspected on Tuesday morning some of the six choke points on Edsa in Balintawak, Cubao, Ortigas, Shaw Boulevard, Guadalupe and Taft Avenue.

When the top PNP officials reached Edsa-Cubao and granted media interviews, Marquez recalled in jest how he experienced traffic firsthand as their convoy plied the highway. Upon inspecting the choke points, they observed that there are “traffic engineering issues” needed to be resolved.

First, Marquez said they thought about relocating U-turn slots and loading-unloading areas for buses that are causing traffic gridlocks on Edsa.

“[It would be best] to relocate certain bus stops and U-turn slots in Balintawak and Kamuning. We will study tactical intervention to solve this in the coming days. The team leaders assigned there are already on it,” Marquez told reporters.

He also raised the need to close some lanes on Edsa that are needed to be made exclusive for private vehicles. “Some of these lanes are being blocked by buses. We will study these lanes and we will make adjustments,” he said.

Additionally, the streets used by some vehicles as shortcuts to the highway are causing a traffic bottleneck on the southbound lane of Edsa-Balintawak going to Munoz. “I think we need to put barriers so it wouldn’t block vehicles from other lanes,” he said.

Last is the U-turn slot in front of Trinoma mall slowing down traffic flow on the southbound lane of Edsa-North Avenue.

“If you take the U-turn from West Avenue, you delay everybody going southbound. Government agencies involved in traffic management should integrate for a holistic intervention,” he said.

As they were coming from an inspection on Edsa-Balintawak, Marquez, Gunnacao, Quezon City Police District director Chief Superintendent Edgardo Tinio and PNP spokesperson Chief Superintendent Wilben Mayor were caught in heavy traffic on Edsa. A radio report said their convoy took about 45 minutes to traverse the 5-kilometer stretch from Quezon Avenue to the Cubao underpass.

After the traffic experience, Marquez concluded that it’s not Balintawak nor Pasay that is the most difficult problem area to solve but the Cubao choke point.

“We were able to decongest Balintawak and Pasay but not the stretch of Kamuning to Santolan flyover. That’s how long the Cubao choke point is, and the HPG (Highway Patrol Group) is focusing on it to lessen the travel time from that place to that place,” he said.

On the first day of cops manning Edsa, traffic flow in all six choke points has been eased. This, however, caused congestion on areas outside the choke points.

“That was what I was discussing with General Gunnacao. We were able to manage traffic on the choke points but (traffic) in nearby areas contributed to the congestion. Our approach cannot be strictly on Edsa only,” he said.

As they were traveling, Marquez said Gunnacao was giving instructions to HPG team leaders on the ground. “Team leaders have to be mobile from one point to another for them to see the cause of the congestion and to come up with a remedy,” he said.

To maintain what the PNP had improved on the Edsa traffic, Marquez said they recruited more people to reinforce the 150 personnel from the HPG and National Capital Police Region Office brought in on Monday.

“The issue of sustainment is a major factor that we are focusing into. We are recruiting more people to augment our personnel,” he said.

Twenty more police officers will assist in the Edsa traffic. He said they will undergo training with the HPG first before they would be downloaded to the highway.

The traffic cops were also made to report earlier for duty at 3 a.m. starting Tuesday to prevent crimes. Marquez previously announced that officers on Edsa will be working in shifts from 5 a.m. to 11 p.m. Julliane Love de Jesus/JE