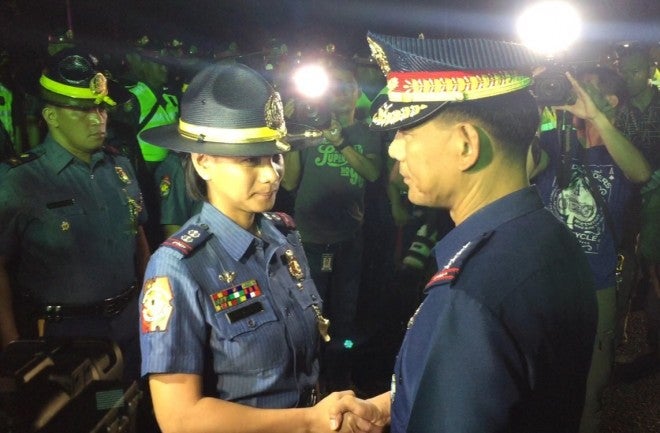 Good luck: PNP Chief Director General Ricardo Marquez talks to a member of the police Highway Patrol Group in this file photo September 7, 2015, before sending her off to traffic duty on Edsa. JULLIANE LOVE DE JESUS/INQUIRER.net

Marquez was inspecting the PNP Highway Patrol Group (HPG) officers tasked to managed traffic on Edsa when his convoy was stalled by the large volume of vehicles moving southbound from Quezon Avenue to Cubao in Quezon City.

The PNP Chief’s convoy of two motorcycle escorts and three vehicles had just come from the Balintawak market area when it came to a crawl at the Quezon Avenue flyover at about 7 a.m., radio dzMM reported.

It took Marquez about 45 minutes to traverse the 5-kilometer stretch from Quezon Avenue to the Cubao underpass, a distance estimated to take only about 11 minutes, according to the website www.distancesfrom.com.

Marquez reportedly wanted to see how the HPG men assigned to traffic duty were doing on the second day after taking over from enforcers of the Metropolitan Manila Development Authority or MMDA. CB