NPC to ‘crack whip’ on preferred candidate in 2016, says Sotto 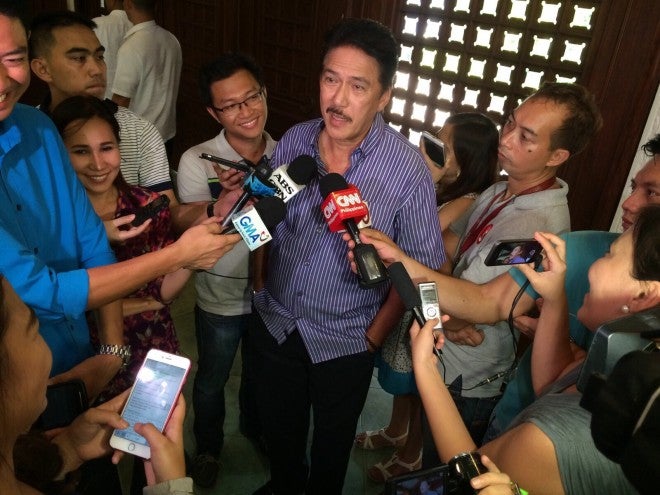 Senator Vicente “Tito” Sotto III on Monday said the Nationalist People’s Coalition (NPC) would “crack the whip” so that the country’s second largest political party would support one candidate in 2016.

Sotto made the statement at the NPC Clubhouse in Balete drive as the party is meeting with Vice President Jejomar Binay about his platform and program for his presidential bid.

Sotto said the NPC is meeting with Binay as part of its talks with all possible presidential candidates.

The NPC has talked with Interior Secretary Mar Roxas, as well as with Senators Grace Poe and Francis “Chiz” Escudero.

Majority of the party members are said to be more supportive of Poe and Escudero in 2016, especially after Poe topped the latest voters’ preference polls for president in 2016.

Escudero, meanwhile, is a longtime member of NPC before he resigned in 2009 to run as independent.

Sotto, an NPC stalwart, said the party would “crack the whip” so that it will have a solid vote on one candidate in 2016.

“The party would probably crack the whip if we decide to support a certain candidate, whether the candidate is Senator Poe, Vice President Binay or Secretary Mar,” Sotto said.

Asked for the possibility of the party splitting because of differing positions, Sotto advised his colleagues to leave NPC if they do not support the party decision.

Sotto said winnability is always a factor in the selection of NPC’s preferred candidate.

He refused to answer how many NPC members are leaning toward which candidate.

Sotto said the NPC would finally decide on who to support after its second meeting with Secretary Roxas Tuesday night.

Sotto said all party officials and some members are present for the meeting with Binay.

Aggabao had said at least 80 percent of the party are supportive of Poe for presidential candidate. He said the NPC would likely endorse Poe if she decides to run for president already.

Former Pangasinan Rep. Cojuangco has publicly declared his support for Binay in 2016.

Meanwhile, Gatchalian had been eyed to run as senator under Binay’s ticket. He is said to run under a possible senatorial banner of Poe and Escudero.

The NPC is the second largest political party in Congress next to President Aquino’s Liberal Party. It has two senators, some 40 House of Representatives members, 22 city mayors, and 14 provincial governors. Marc Jayson Cayabyab/JE