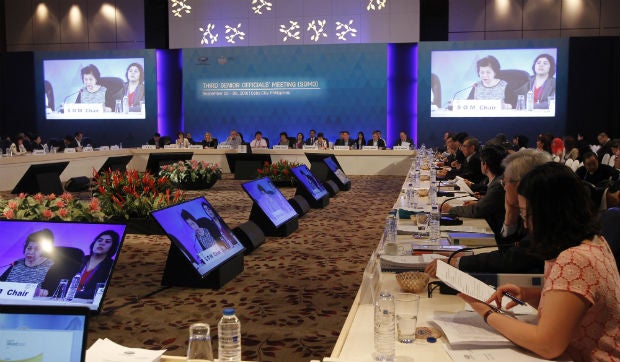 Senior officials of the of the 21-member economies of the Asia-Pacific Economic Cooperation attend the Third Senior Officials Meeting in Cebu on Sept. 5-6. Photo from APEC 2015 Media Operations Committee

CEBU CITY–Senior Officials of the Asia-Pacific Economic Cooperation (Apec) had a “very pleasant impression” of Cebu as they wrapped up their meeting here on Sunday.

Foreign Affairs Undersecretary Laura del Rosario said the Apec members who attended the Third Senior Officials’ meeting and related meetings over the past two weeks in Cebu described the “Queen City of the South” as a very pleasant city.

More than 60 ministerial meetings will be held here, which started on August and will last until October.

More than 3,000 delegates from the 21-member economies are expected to arrive here in batches ahead of the leaders’ summit in Manila in November.

Aside from Cebu, other key cities and places in the Philippines also hosted Apec meetings namely Clark, Tagaytay, Boracay, Bataan and Iloilo among others.

Foreign Affairs Undersecretary and Apec spokesperson Charles Jose earlier said Apec events being held in different places in the country “spur and empower local economies” to be centers for development.

On Saturday night, Apec officials and delegates took a break from their packed schedules to get a taste of Filipino culture through the arts and dining.

Apec delegates got a taste of some of Cebu’s famed delicacies, like the Cebu Lechon and other sumptous Filipino food.

Del Rosario mentioned that one delegate joked that he already consumed two-thousand kilos of mango.

Del Rosario replied saying the delegates “should get a medical check-up before they go home.”

“I am sure they have formed very pleasant impression of Cebu. They won’t mind coming back in the future,” she said.

The series of senior officials meeting and other related meetings in the country is in preparation for the Apec Leaders’ Meeting in November, which will be hosted by the Philippines. 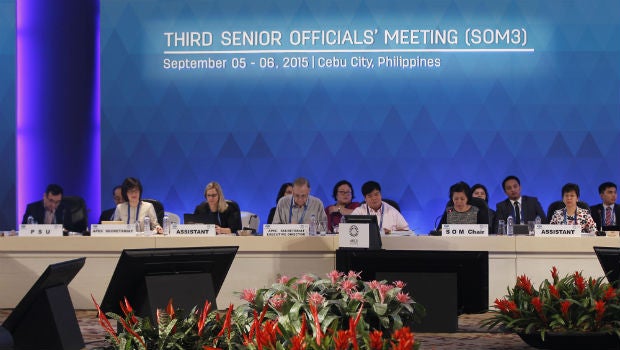 Senior officials of the of the 21-member economies of the Asia-Pacific Economic Cooperation attend the Third Senior Officials Meeting in Cebu on Sept. 5-6. Photo from APEC 2015 Media Operations Committee

Apec in Boracay a boost, not deterrent, to PH tourism – spokesman