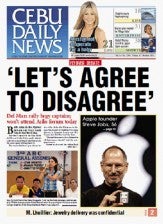 Both sides in the flyover debate say they want what’s best for Cebu.

She was invited to a 3 p.m. forum today at the Asilo dela Milagrosa to discuss the impact of building two more flyovers in Gorordo Avenue and M.J. Cuenco but Del Mar won’t be there.

“No need because we have listened to all their issues already,” said the congresswoman.

Yesterday, she and her father Raul gathered more signatures for a manifesto of support for flyovers from 72 of Cebu City’s 80 barangay captains during an assembly of the Association of Barangay Councils held in Lapu-Lapu City. (See separate story.)

Work on the P300-million Gorordo Avenue flyover, which critics fear will damage the historic Asilo dela Milagrosa without solving traffic congestion, is set to start next month by WTG Construction supervised by the Dept. of Public Works and Highways.

DPWH engineers and officials from the region 7 office said they would attend today’s forum.

“They are not ready to give up,” said Joel Lee, co-convenor of the newly renamed Movement for a Liveable Cebu, which is mounting the dialogue today.

But Lee said the lobby group would continue to explain issues behind the flyover controversy to Cebuanos and consider taking legal action to stop the projects.

Forum speakers include Dean Joseph Espina of the University of San Carlos College of Architecture and Fine Arts, Architect Melva Java on heritage conservation, Lee of Permaculture Cebu who will talk about what makes a “liveable city,” and an environment lawyer.

They will discuss the need for Cebu’s growth to consider principles of urban design, long-term planning, heritage and a sustainable environment.

Lee said the flyover controversy is bringing out local expertise and prompting professional organizations to speak up, which didn’t happen before in the 2007 failed protest against the Banilad-Talamban flyover.

*Diocesan priests in Cebu are winding up their retreat in Talavera and due to release a statement about the flyover issue.

* Rep. Cutie del Mar and her father are set to meet Cebu Archbishop Jose Palma for a dialogue on Saturday with Sister Letecia Derilo, administrator of the Daughters of Charity, which runs the charity house and Shrine of the Miraculous Medal.

Two more citizen groups came out with official positions against the rise of flyovers.

The Bosconian International Chamber of Commerce–Cebu Chapter in a statement asked for a “moratorium” on flyovers because these did not undergo public consultation and lacked a master plan.

The United Architect of the Philippines (UAP) in Cebu, in a position paper, said it supports the Movement for a Liveable Cebu and a stop to the flyover projects.

“Designing away the need for cars is the most important step in creating sustainable places,” said the UAP chapter.

“Putting up flyovers does not necessarily mean solution for traffic as well. Traffic congestion may be caused by multiple reasons and not only due to more cars that the road can accommodate. It may be implementation of our traffic rules, drivers road courtesy, riding public’s discipline, signages and designated stops, and narrow roads that need widening.”

The Cebu architects called on officials to “review our alternatives” and “build right” to ensure Cebu’s urban design will “meet the needs of present generations without compromising the ability of future generations to meet theirs.”

The Bosconian International Chamber of Commerce–Cebu Chapter scored the lack of careful planning.

“It is totally unacceptable that these flyovers that are proposed for the community are not made in relation to an updated and comprehensive master plan,” it said.

The group said the historical value of the urban core of Cebu cannot be defaced by the installation of “humongous infrastructures.”

The group urged government agencies to focus on building a mass transit system, sidewalks, bike lanes and open space for the people. The additional flyovers would encourage the use of more vehicles, which could worsen issues on pollution and climate change, they said.

While flyovers are not the complete answer to traffic congestion, Cutie del Mar said the problem has to be addressed today.

“I cannot just sit down and watch so much traffic going by. We have to do something right now,” she said in an interview.

“This is something that DPWH has studied already. We respect every opinion and take everything into consideration but in the end we still decide for the common good,” she said.

Lee, a hotel owner, said he met yesterday afternoon with Raul del Mar at the Casino Español and pleaded for him to delay construction and make a careful study of the flyovers.

But the elder Del Mar “really believes that flyover is the solution” to traffic, Lee told Cebu Daily News.

According to Del Mar, the two new flyovers on Gorordo Avenue and M.J. Cuenco would complete a “series” of three existing flyovers from Banilad to uptown Cebu City that would have vehicles “travel without stopping.”

They also discussed the budget for an updated traffic master plan, but Del Mar insisted that the two flyovers should be made first for urgent purposes.

“We agreed that sustainability and the Bus Rapid System is good for Cebu but he said that this was a long-term solution,” Lee said.  With reports from Candeze Mongaya and Marian Codilla