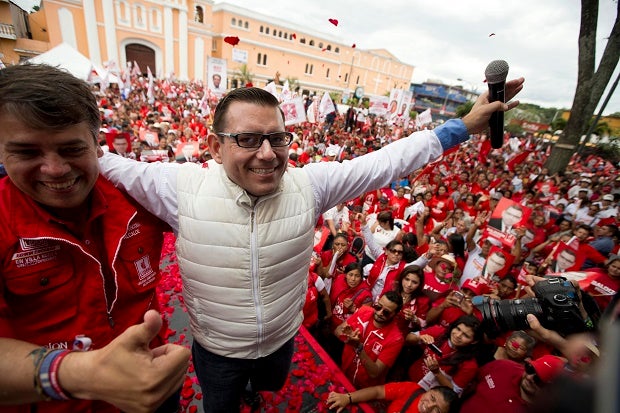 Leading presidential candidate Manuel Baldizon of the Democratic Freedom Revival Party, accompanied by mayoral candidate Edwin Escobar, poses for photos during his closing campaign rally, in Villa Nueva, Guatemala, Friday, Sept. 4, 2015. Leading in most polls for the upcoming presidential race is Baldizon, a wealthy 44-year-old businessman and longtime politician. His running mate is accused by prosecutors of influence trafficking, but as a candidate he enjoys immunity from prosecution. AP

GUATEMALA CITY — The wave of political turmoil that toppled Guatemala’s president has overshadowed Sunday’s vote to elect a new leader — an election many fear could put a lid on the anti-corruption drive.

Tens of thousands who demonstrated for the ouster of President Otto Molina Perez got part of their wishes when the president resigned to face possible corruption charges in a customs fraud scheme. He was spending the weekend in a military lockup.

But a second major demand wasn’t met: the postponement of the election that many said offered little alternative to the old guard.

“The people are rejecting this political system, the mafia takeover of democracy. They feel like voting is simply selecting the next person who will loot the country,” said Manfredo Marroquin, president of the influential civic group Citizen Action.

“They are not rejecting democracy,” Marroquin said. “What they’re demanding is to reset, run an anti-virus and start over from scratch.”

Leading in most polls with roughly 30 percent backing is Manuel Baldizon, a wealthy 44-year-old businessman and longtime politician. His running mate is accused by prosecutors of influence trafficking, but as a candidate enjoys immunity from prosecution.

Baldizon’s most competitive rivals are a comedian with no political experience, a former first lady and the daughter of an ex-dictator accused of genocide.

Baldizon has acknowledged Guatemalans’ disgust with crime, corruption and impunity. His campaign website vows a “modernization of the democratic state” to reform government and combat poverty and social inequality.

Critics see Baldizon, who finished second in the last presidential race, as an example of what’s wrong with the country’s political class. He initially campaigned on the slogan “It’s his turn” — a reference to the fact that the last four elections have been won by the previous runner-up. At protests, demonstrators have chanted: “It’s not your turn.”

After Baldizon’s campaign blew through the legal ceiling on electoral spending, he continued pouring money into his campaign, ignoring court orders to stop.

Baldizon’s campaign also says a lot about the country’s chronic insecurity. He has worn a white bulletproof vest designed to look like a jacket on his stops, traveling in a helicopter or armored vehicle and accompanied by bodyguards toting automatic weapons.

Allan Villatoro, a 26-year-old who traveled to the capital from the western city of Huehuetenango to join the protests, scoffed at Baldizon, calling him “Dr. copy-paste” — a nickname that stuck after it emerged that the politician had plagiarized much of his doctoral thesis and a book he authored.

Baldizon’s closest rivals include Jimmy Morales, a TV comic who boasts of his outsider status, and Sandra Torres, who divorced former President Alvaro Colom ahead of the last presidential race to try to get around rules barring presidential relatives from running. She is a businesswoman and longtime political party figure with a master’s in public policy.

Also on the ballot is Zury Rios. Her father, former dictator Efrain Rios Montt, faces charges of crimes against humanity for killings by security forces during his 1982-83 regime.

“You can’t trust anyone,” medical student Christian Leonhardt said. “They all belong to the same corrupt system.”

According to a UN commission, Guatemalan politics are heavily financed by drug traffickers and other criminal networks in return for protection and favors.

A recent report by the Central American Institute for Fiscal Studies calculated that 50 percent of party financing is dirty: from bribes and money laundering to influence peddling and tax evasion. The report estimated that the national cost of corruption is $560 million, or 6 percent of Guatemala’s annual budget.

“There is a weariness surrounding the patronage game,” said Karin Slowing, a former top administration official under Perez Molina’s predecessor.

Some critics are urging voters to go to the polls wearing black clothes of mourning, abstain or cast null ballots. On the streets it’s hard to find a campaign poster that hasn’t been covered with insults.

Few believe that the vote will solve deep problems like a 70 percent poverty rate, 50 percent child malnutrition, pernicious gang influence and one of the world’s highest homicide rates.

But some hope that prosecutions and popular outrage over corruption may frighten leaders into reconsidering bad behaviors that long went unpunished.

“Whoever wins is going to be watched under a magnifying glass,” said Arnoldo Arriaza, director of a prominent business association. “Before, nobody pointed a finger at those who were corrupt, and now we all know who they are and where they are.”