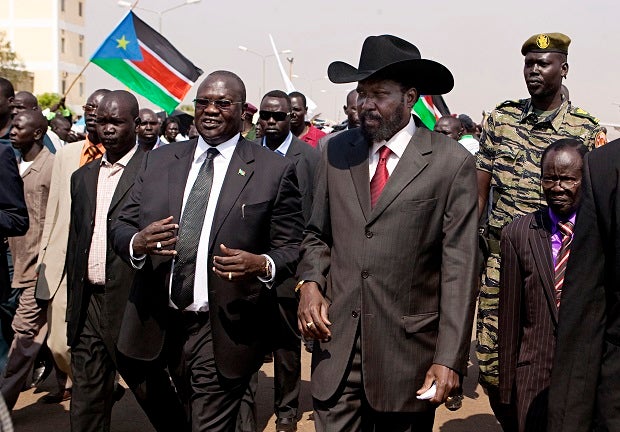 In this Tuesday, Feb. 8, 2011 file photo, South Sudanese President Salva Kiir, centre-right, is greeted by then Vice-President Riek Machar, centre-left, on Kiir’s return to Juba, South Sudan, from Khartoum where he attended the formal announcement of southern Sudan’s referendum results. South Sudan President Salva Kiir signed a peace deal with rebels Wednesday, Aug. 26, 2015 in a ceremony witnessed by regional leaders in the capital Juba, after 20 months since the start of fighting between loyalist forces and rebels led by his former deputy Riek Machar. AP FILE PHOTO

The council called for an immediate end to fighting in a statement after a closed-door meeting Friday and again threatened sanctions if the government and opposition don’t fully implement the peace agreement they recently signed.

The diplomats, speaking on condition of anonymity because discussions were private, said US Ambassador Samantha Power raised the possibility of imposing an arms embargo and travel ban on one individual each from the government and the opposition.

The council welcomed the commitment by South Sudan’s feuding president and ex-vice president to halt military operations but expressed “deep concern” at recent reports of fighting.