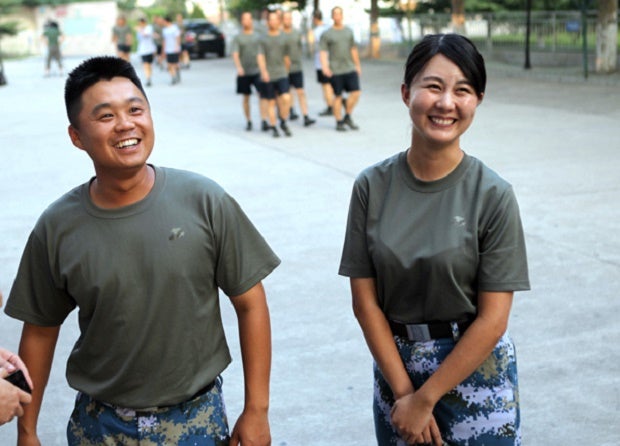 Lieutenant Li Yiming (left) from the PLA Combined Band and his fiancee, Su Ya, planned to register for marriage after the parade. CHINA DAILY

Lieutenant Li Yiming, a musician in the PLA navy, said it was an honor to salute war heroes and veterans through music.

“We have trained for three months for the big day and we are determined to impress the world with our performance,” the member of the PLA Combined Band said.

Li was speaking two days before the parade, but said it felt as though he had already experienced the whole event.

“I have attended one of the rehearsals and, despite it was just a rehearsal, I was awed by the solemnity and magnificence embodied in the event,” he recalled.

“Our music will help viewers at the scene as well as watching on TV to better understand the glorious fight by our ancestors.”

China began using a 1,000-strong combined military band at its first National Day parade in 1950 when Chairman Mao Zedong suggested that a large band should be established to perform at national parades.

Thursday’s parade marked the 15th performance of the PLA Combined Band and the first time that female musicians have taken part.

Throughout the event, the band played 30 works, most purely instrumental with the rest accompanying songs performed by the PLA Chorus.

The combined band and the chorus were formed in June to serve the parade and will be disbanded after it.

Most of the music and songs performed by the two groups were classics from the wartime era, with the rest being patriotic.

Much of the music was re-arranged to make it suitable for the large band, said Major General Li Zhensheng, deputy head of the PLA General Political Department’s publicity office, who oversaw the two groups’ training.

“These works reflect the Chinese people’s heroism and represent their aspirations for a strong nation and a mighty military,” he added.

In order to select the best musicians within the military, the PLA General Political Department sent a team to interview and audition more than 2,600 players from 55 professional and amateur PLA bands, according to Senior Colonel Liu Cheng, political commissar of the band.

About 1,300 musicians were chosen. They began practicing the selected musical works in late April at their own barracks and came to Beijing for collective rehearsals on June 3, Liu said.

“One of our responsibilities will be quite important－the national flag guards will raise the flag based on our beats of the national anthem while the foot formations will march past the Tian’anmen Rostrum in accordance with the beats of the music we play,” he said.

For Li, Thursday’s occasion also has a personal meaning. “It will be an amazing experience to play music with my fiancee, Su Ya, who is also a musician with the navy, in front of thousands of spectators in Tian’anmen Square and possibly tens of millions of TV viewers,” he explained.

“After I was chosen to undertake the task, she applied to join the band and was approved. We plan to register for marriage right after the parade,” he said with a smile.

“Moreover, my father is also a musician with the Armed Police Force Band. He is responsible for training musicians from his band who will take part in the event, so the training is like a family party for us.”