North Korea denies it apologized over mine blast 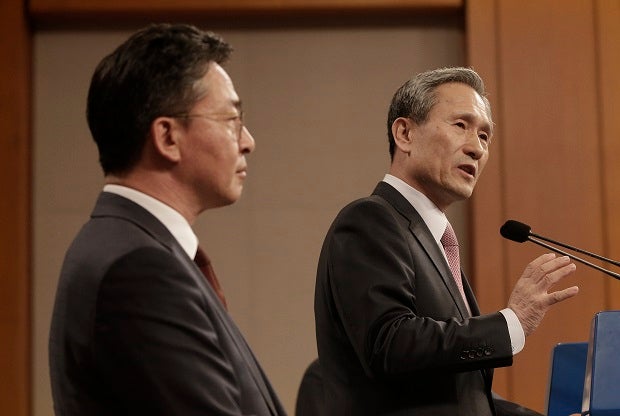 SEOUL, South Korea — North Korea insisted on Tuesday that its recent expression of “regret” over a mine explosion that maimed two South Korean soldiers was not an apology, as Seoul claims it was.

The statement by Pyongyang’s powerful National Defense Commission is the first explicit denial of Seoul’s interpretation of the key part of an accord that came after marathon negotiations over three days that allowed the two rivals to step back from escalating threats of war.

The South heralded Pyongyang’s use of the word “regret” as a mini-breakthrough, claiming that it successfully pushed the North to take responsibility for the blast, and agreed to turn off cross-border loudspeaker broadcasts critical of the North’s political system.

But North Korea argued that the word “regret” doesn’t imply an apology, as South Korea says it does.

“This kind of interpretation is the result of ignorance on the meaning of a Korean word and its concept,” said the statement issued by an unidentified spokesman at the commission’s policy department.

“South Korea must not forget for an instant that a misjudgment on the other side would trigger fatal consequences on North-South relations,” it went on. “Nothing can be cruder and unhandsomer than describing as one side’s unilateral victory a joint statement that North and South Korea agreed upon.”

The North’s denial muddies the prospects for better ties between the Koreas, which remain in a technical state of war. South Korean officials had hoped the agreement would promote warmer ties. At the time of the accord, the two sides had agreed to hold more talks and resume the reunions of families separated by war.

But the two Koreas have a history of failing to follow through on past attempts at reconciliation accords, and their ties have been bad since conservatives took power in Seoul in early 2008.

The North’s statement, carried by the official Korean Central News Agency, also criticized South Korea’s live-fire drills with the US last week, saying they showed the South’s belligerence and threatened to scuttle chances for improving ties. South Korean defense officials said the drills, the biggest-ever in kind, were routine training between the allies.

South Korea’s Unification Ministry spokesman Jeong Joon-hee said later Tuesday it’s time for the two Koreas to faithfully try to implement their agreements rather than arguing over wording in them.

In an indication that North Korea’s hard-line stance hasn’t changed despite the agreement, North Korean leader Kim Jong Un said last week that the deal was achieved not on the negotiating table but thanks to his country’s military capability based on its “nuclear deterrent.” The North’s statement Tuesday reiterated Kim’s stance.