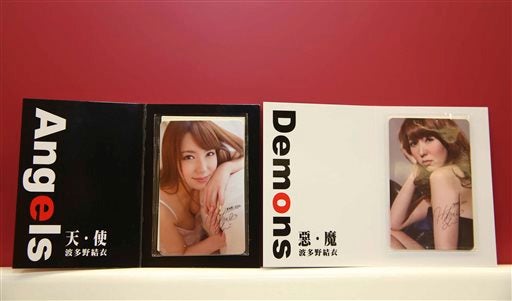 Taiwan’s EasyCard Corp. says on its website that it sold its full run of 15,000 card sets by 4:18 a.m. Tuesday after phone orders started at midnight.

Hatano, also popular in Japan, is pictured from the elbows up and clothed. A pose on the cards’ wrapper appears with the word “angels” and another is accompanied by the word “demons.”

Critics campaigned against the cards, saying the images disrespect women and send inappropriate messages to children. Many stores declined to sell the cards, and the company ended up offering them via hotline only.

Taipei Mayor Ko Wen-je, whose government is a 40 percent investor in the swipe card company, had asked that the cards avoid being “openly sold,” such as at convenience stores or metro stations, deputy city spokesman David Huang said.

“The city government believes that because a controversy exists, there’s no need to do this sale,” Huang said Tuesday.

Taiwanese went for the cards because they look up to Japanese culture, one metro rider said. “It’s culture worship, like when you’re young and collect cards with cartoon stars like Doraemon,” she said.

Japanese cultural icons commonly appear in children’s books and on items such as stationery and smartphone cases. With nearly 3 million arrivals last year, Taiwanese rank as the top source of tourism to Japan, which was also its colonizer for five decades before the end of World War II.

The 15-year-old swipe card company, which has sold more than 20 million cards including co-branded editions, apologized online for the dispute and pledged to do an internal review of distribution procedures.

“EasyCard Corp. deeply apologizes for the setting off this massive public dispute,” the company said in a statement on its website Tuesday. “In the future we will continue to strengthen public service and social responsibility.”

Local media say proceeds from the $15.4 card set sales will go to charity. Company spokespeople were not available for comment.