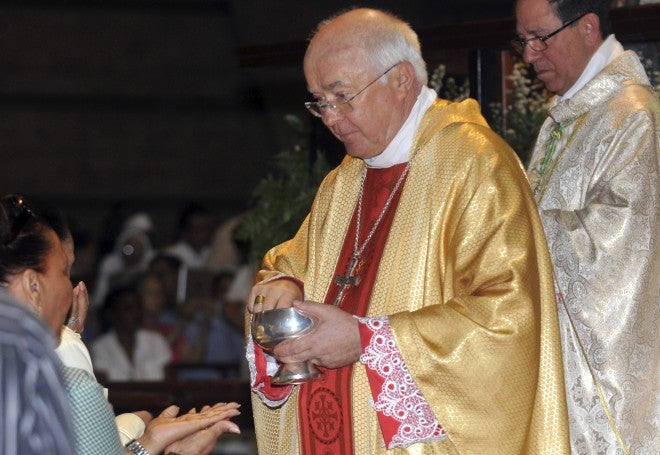 VATICAN CITY — Eight minutes of silence instead of a homily marked the Vatican funeral Monday of a former papal diplomat, whose trial on charges of possession of child pornography and sexual abuse of minors had begun this summer in a Holy See courtroom.

The Holy See, citing preliminary autopsy results, has said Wesolowski, 67, died of a heart attack in his room at the Vatican on Aug. 27.

During the funeral, a ritual prayer was recited so God might “cancel the sins that (Wesolowski) had committed with human fragility.”

Cameras were banned during the funeral. Burial will be in Wesolowski’s native Poland.

Celebrating the Mass was a Polish prelate, Monsignor Konrad Krajewski, who is Pope Francis’ chief alms-giver.

Wesolowski was accused of sexually abusing teenage boys while serving as papal envoy in the Dominican Republic.

His trial in a Vatican courtroom began on July 11, but was hastily adjourned because he had taken ill a day earlier and was hospitalized in intensive care.

In the few minutes before trial was adjourned indefinitely due to that illness, the court clerk read aloud the charges. Among them was possession of what Vatican prosecutors described as an “enormous” quantity of child pornography on Wesolowski’s computer. Another charge described how Wesolowski allegedly corrupted, through lewd acts, boys presumed to be between 13 and 16 years old “in order to carry out on them, and in their presence, sexual acts.”

The trial was seen a highly visible way for Francis to show he’s serious about cracking down on high-ranking churchmen worldwide accused of sex abuse of minors or of covering up such abuse by lower-ranking churchmen.