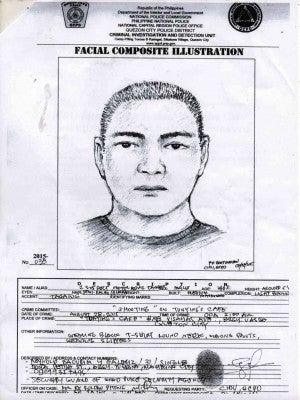 The Quezon City Police District released on Monday the facial composite illustration of one of four suspects in the gun attack last Friday on the Ka Tunying café, owned by broadcaster Anthony Taberna.

In a statement, QCPD Director Police Chief Supt. Edgardo Tinio quoted witnesses as saying the gunman was estimated to be in his 40s, around 5’6″ in height, semi-bald with black hair, medium built, has light brown complexion.

Tinio added that a Special Investigation Task Group (SITG) has been formed, led by QCPD deputy district director for administration, Senior Supt. Danilo Bautista, to conduct an “extensive investigation” on the motive for the strafing and to identify those behind it.

At around 2 a.m. on Friday, two unidentified gunmen fired shots at the two-story café located on Visayas Avenue, Barangay Vasra.

Security camera footage caught four men, riding in pairs on two motorcycles, fleeing from the scene. The cafe was opened only last Aug. 21.

Earlier, the QCPD Criminal Investigation and Detection Unit (CIDU) head, Chief Insp. Rodelio Marcelo, said the shooting was most likely meant to harass Taberna due to his work.

Taberna, meanwhile, dismissed speculations the incident was related to the ongoing brouhaha in the Iglesia ni Cristo, of which he is a member.

The religious sect has been rocked by a criminal complaint filed by Taberna’s uncle, expelled minister Isaias Samson Jr., against the INC ruling council. The receipt of the complaint has prompted the INC members to hold rallies the past week decrying the government’s perceived meddling in their church’s affairs.

On Sunday, Taberna made an appearance at the INC rally on Edsa, throwing his support for the church. Later, he announced in a post on his Instagram account that he was taking a leave of absence from his two television shows to avoid a “conflict of interest” between his religious beliefs and his duties as a reporter.

The QCPD encouraged anyone with information on the identities of the suspects in the shooting to call on the police hotline 117 or the Quezon city police Tactical Operations Center at 473-3106 or 4361173.