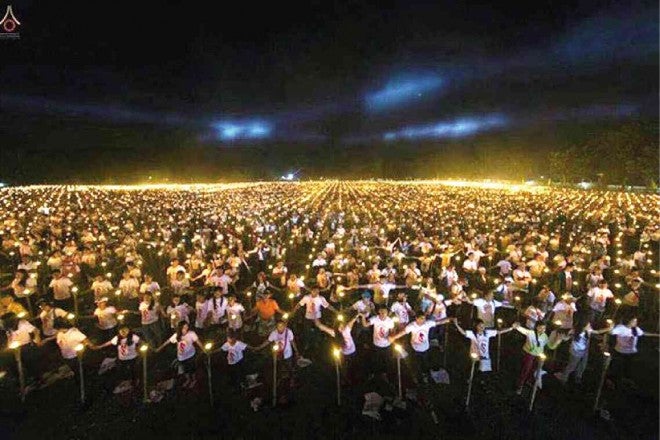 ILOILO CITY—Braving an intermittent drizzle, about 10,000 mostly residents of San Enrique town in Iloilo province lit about 16,000 candles to form an image for inner and world peace on Saturday evening.

The 16,000 candles lit on the grounds of the San Enrique Central School formed an image of the map of Iloilo province and San Enrique, and the symbol of Middle Way Meditation Institute (MMI), the Thailand-based organization that spearheaded the event. The candles also formed the event’s theme “Progress through Inner Peace” and “San Enrique, Iloilo 2015.”

San Enrique, a third-class municipality (annual income of P5 million but less than P10 million) located about 67 kilometers north of Iloilo City, also garnered the distinction of being the first “Inner Peace Town” of the MMI which has also organized in 2013 and last year.

“The event was very successful and it brought our town together,” said Mayor Ramona-Palabrica-Go, a retired Philippine Army general, the first Filipina to have held the post.

The event is the third in the past three years seeking to promote meditation and inner peace. It was also organized by the provincial government and the Department of Tourism.

Last year, a similar event posted a Guinness World Record for the largest flaming image using candles after 56,680 candles were lit in an open-field Savannah subdivision in Oton town, Iloilo.

In 2013, a world record was also set for the most number of sky lanterns flown simultaneously after thousands of participants flew 15,185 sky lanterns at the football field of the University of the Philippines Visayas in Miag-ao town, Iloilo.

Go said there was no objective to post a new world record in this year’s Light of Peace event.

She added they only wanted to promote the values and virtues being espoused by the organization including cleanliness, orderliness, politeness, punctuality and meditation.

The participants gathered hours before the event started about 5:45 p.m. and ended two hours later.

Those who came were mostly students, teachers, employees and other residents of the 28 villages of the town as well as from Iloilo City and neighboring towns. There were also guests from other countries, according to Go.

The event included a meditation session and an ecumenical prayer.

About 760 policemen and 240 soldiers were mobilized to ensure the safety and security of the participants.