Anthony Taberna on Iglesia ni Cristo protest: ‘We were not forced to go’ 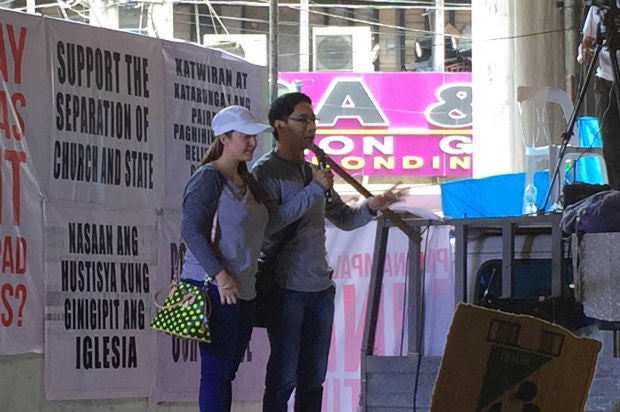 ABS-CBN journalist and Iglesia ni Cristo member Anthony Taberna addressed fellow church members who are staging a “peaceful assembly” at the intersection of Edsa and Shaw Boulevard on Sunday.

In his speech, Taberna said that INC members were not forced by church authorities to converge at Edsa-Shaw intersection.

(We were not forced to go here. We are all tired. We could have just stayed in our homes. But since we love Iglesia ni Cristo, we will continue to fight for it.)

He was joined by his wife Rossel onstage.

The Philippine National Police-Eastern Police District estimated more than 1,000 people at the rally by Sunday noon to assail the supposed encroachment of the Department of Justice (DOJ) on the “internal affairs” of the Philippine-based church.

There should be a separation of Church and State as provided in Sec. 6, Article II of the Constitution, the INC members claim.

Sunday marks the fourth day of the INC members’ protest which started with a vigil at Padre Faura Street in the city of Manila.

The move of the INC members to occupy Edsa drew flak from various Filipinos as it contributed to the heavy traffic flow which coincided with payday and long weekend traffic. Aries Joseph Hegina/CB